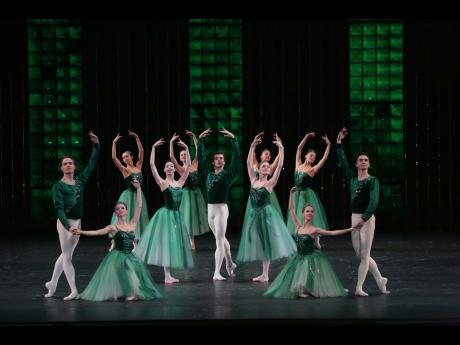 Renowned as the father of American ballet, George Balanchine was a Russian-born American ballet choreographer. His opulent triptych Jewels was inspired by his visit to the famous jeweler Van Cleef and Arpels, on New York's Fifth Avenue, celebrating the cities and dance schools of Paris, New York, and St Petersburg, each bound to its own precious stone.

With this first abstract ballet, Balanchine built a homage of captivating beauty to the dance schools that had forged his style, Paris, New York, and St Petersburg, each represented by a contrasting jewel: an emerald, a ruby, and a diamond.

The Bolshoi Ballet's presentation of 'Jewels' offers a unique occasion to enjoy Balanchine's visually captivating work as the Bolshoi is the only company authorised by the Balanchine Trust to film and broadcast his masterpiece starring Olga Smirnova, Semyon Chudin, Vladislav Lantratov, Anna Tikhomirova, Ekaterina Krysanova, and the Bolshoi Corps de Ballet.

Encore performances of the spectacular new 2015-2016 season of the Bolshoi Ballet, captured live from

Moscow are now showing at Palace Cineplex at the Sovereign Centre, Liguanea, in Kingston. Tickets are on sale at the box offices and via the web at www.palaceamusement.com with a Palace Card.