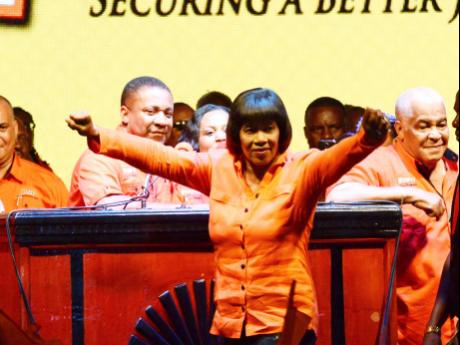 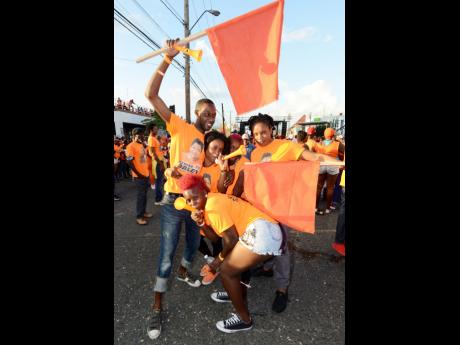 Although Jamaicans were eager to hear the announcement of the 2016 election date, many were more excited to be part of the dance session that unfolded on the streets of Half-Way Tree last Sunday.

Let's face it! As a people with music and dance pulsating through our bodies, we are more interested in having a good time and making sure 'the vibes inna di place tun up till it buck' than listening to elaborate speeches.

The deejays at the recent People's National Party (PNP) mass rally understood the needs of their fellow Jamaicans all too well. Their musical juggling not only kept the party atmosphere alive, it also kept Jamaicans duly entertained - far more than even the prime minister herself.

It is no secret that over the years, dancehall and reggae music have become a staple on the political campaign trail. Both the ruling PNP and the opposition Jamaica Labour Party (JLP) have strategically injected popular music into their speeches at these rallies. But in case you were hiding under a rock since as far back as the '70s, Sunday's mass rally showed just how much using the right music at strategic moments could ensure an unforgettable political meeting.

As is done in the dancehall, where the selector would make an impromptu speech and then 'drop a tune' that further enhances what he is saying, the night's musical selections were so on point that they matched the speeches perfectly. Let me draw on a few examples from last Sunday's rally to elaborate.

During the finance minister's speech, the honourable Dr Peter Phillips spoke of the Government's economic achievements since they took office in 2012. He went on and on about how many IMF tests his administration had passed and how much growth the economy had experienced over the last four years - and all that jazz. He made some valuable points, but I doubt anybody from the crowd paid much attention. It may not have been until the selector played some popular dancehall tracks to drive home the minister's point that the crowd even remembered that he was onstage. It took the lyrics from Alkaline's All About the Money for Jamaicans to actually listen to Phillips' speech. So when he began boasting again about his team's accomplishments and the deejay played Champion Bwoy, the crowd went wild - literally. People were seen firing blanks into the night sky, while others danced and regurgitated the words of the song.

Phillips' time on stage would not have been complete if he hadn't highlighted the shortcomings of the JLP, so before leaving the stage, Phillips encouraged Jamaicans to never forget the state of the country's economy when the opposition was in office. The selector then played Adele's mega hit Don't You Remember, skillfully playing just that one famous line for emphasis.

The 'party' was 'up', or should I say 'way up', from there as the prime minister later made her way to the stage. As if making a declaration, the prime minister made her grand entrance to Fab 5's Woman Anthem playing in the background. The lyrics of the song boldly state 'woman a guh run this country', a statement, Simpson Miller no doubt believes in whole-heartedly (perhaps she got that 'word' when her master touched her). Nevertheless, the crowd enjoyed the selection. once again, the song was on point. kudos to the deejay.

During her speech, the prime minister thanked the Jamaican people for sticking by her administration over the past four years and promised that her team would continue to look out for the people's interest should they win the next general elections. She pledged her allegiance to the people after which the deejay fittingly played Write Your Name (Across My Heart), a Kenny Roger's classic that proved to be a major hit with the crowd based on reactions.

As she carried on with her speech, the prime minister spoke on issues such as the decriminalisation of marijuana and removing the shift system from over 50 schools across the island as a sign of progress. The late Sugar Minott's Oh Mr DC and Whitney Houston's Greatest Love of All were the songs used for emphasis. In the moments leading up to the announcement, it was clear that the PNP had a vision for how that moment should feel and sound. Not only did they create a mood of excitement using recorded music, but they also incorporated the use of instruments. They literally 'sounded the trumpet' as they got ready to announce the election date.

Shouts of "Call it Portia!" were now coming from the audience, and the PM responded "yuh ready?" Cheers and roars then erupted as the deejay played Bunji Garlin's Differentology - but only the intro, which echoed, 'Yuh ready' - before skipping to the chorus as the PM declared that the PNP was "ready for the road". The February 25 date was then announced, signalling a close to the high-energy session.

I believe the prime minister's speech was way too long for the occasion, but I never minded it at all as I listened with anticipation for the genius selections that the deejay would draw for next. Only the sea of orange reminded me that I was at a political rally because the music sure made me feel like I was at a dance session or street dance. The performance of the selectors was so good that some social media users suggested that a mix tape be made entitled MIA. but hold your horses! that acronym now carries a new meaning, thanks to the prime minister. Should this mix tape materialise, MIA would mean Mama In Action and not Missing In Action. I'm longing for the elections to come and go, but I will sure miss all the excitement that comes with going to the polls!