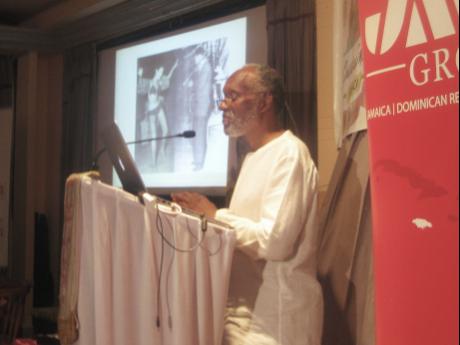 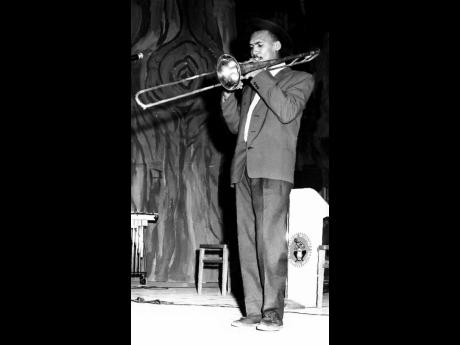 The story of trombonist Don Drummond and his lover Anita 'Margarita' Mahfood, who he was convicted of murdering, is one of the well-known sad stories of Jamaican popular music. Compounding that tragedy was Drummond's death in the Bellevue asylum.

Last Sunday, as the 2016 Grounation series began in the lecture theatre of the Institute of Jamaica, East Street, Kingston, Jamaica Music Museum director Herbie Miller gave extensive in-depth treatment to the persons behind the double deaths. Drummond was first as Miller spoke on 'Margarita and Malungu: The Victory and Tragedy of an Art Couple'. Miller's two-part talk was supported by images and music, the large audience groaning en masse at points when a particularly popular piece was cut short.

Drummond's story started with a look at the Alpha Boys School, where Drummond learnt to play the trombone. Musicians like Eric Dean, Roland Alphanso, Seymour 'Foggy' Mullings, Baba Motta, Wilton 'Bra' Gaynair, and Sonny Bradshaw were included in the early part of Drummond's story. Drummond's flair for composition showed early, as he wrote The Message for a band put together by Sonny Bradshaw in 1948.

Although Drummond is renowned for playing with The Skatalites, Miller pointed out that "he was indeed a jazz musician before anything else". Fusing with that jazz foundation was, like so many other musicians, the influence of Oswald 'Count Ossie' Williams in Wareika Hills.

While worldwide rankings of Don Drummond have been the focus of many mentions of the trombonist, Miller dismissed the figures for aesthetics. "For me, it does not matter if he was ranked number one or number five. In my book, this is the greatest expressionist you will hear on this instrument - and there have been a lot of them," Miller said.

He spoke about how Drummond made the trombone a mournful instrument, citing singer Sarah Vaughn's opinion on hearing him play. Miller also spoke about Drummond reaching back into his history in playing particular melodies, as well as heavily political titles, including Mesopotamia, Confucius, Red China, Fidel Castro and President Kennedy, which showed political convictions and international sensibilities.

There was laughter when Miller related a particular recording session for Prince Buster, when Drummond was criticised heavily by fellow musicians Lloyd Brevett and Lloyd Knibb for not playing when he should. One demanded why Buster did not get the "madman out of the studio" and the other agreed.

As the story goes, Drummond moved to the studio door, took out a knife, started to clean his fingernails and said, "Who want to leave, leave, who want to stay, play." To that, Brevett said, "Cho Buster, make we play the session".

On the other side of the couple, Margarita was the 'The Brown Girl in the Ring', who "committed class suicide" by getting involved with Drummond. However, Miller remembered trailing a fish smell to her father's van, which he used for his seafood business, to their home and commented, "Is not a big shot Syrian, Mr Mahfood. It was an upstart".

Before Drummond, Margarita was married to a boxer and, Miller said, "as a little boy, I see her put fight to him".

Like many other performers of the time, Margarita got her break through talent show organiser Vere Johns. She hooked up with a trombonist who did not speak much and, "for all accounts, he was basically mute. He spoke through his horn".

Margarita's dancing changed when she made the Wareika Hills connection, Drummond tried to teach her to play the saxophone and she also went behind the microphone. Miller played her track for the Grounation audience.

However, their relationship was marked by violence and making up, then came the time when Drummond walked into the Rockfort Police Station and said a woman up the road had killed herself with a knife. At first, he was not taken seriously, but when a policeman finally accompanied the trombonist back to the scene, Margarita was dead with a knife in her chest.

At this point, Miller played Drummond's Bellevue Special. The trombonist's Last Call was also included in the selections at this point of the presentation, and Miller remarked on the two trying to hold together a relationship in the context of a plantation society.

He also noted that Heather Augustyn, whose book Don Drummond - The Genius and Tragedy of the World's Greatest Trombonist was launched earlier in the programme, "used quite a bit of my work to flesh out the book."