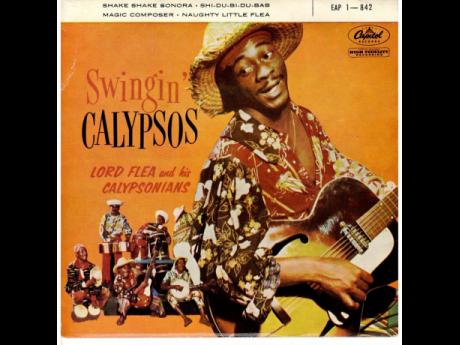 While Lord Kitchener was promoting the Trinidadian style of calypso music in the United Kingdom (UK) in the early 1950s, Jamaicans were busy at home creating their own brand of calypso which became known as mento.

It was a vibrant danceable rhythm that contained elements of rich Jamaican folk music interwoven with African melodies brought to the Caribbean by African slaves. This musical concoction was further enhanced by the inclusion of the European dance rhythm called Quadrille, brought to the islands by slave owners.

Kitchener may have been the first to take calypso into international waters, but the Jamaican calypsonian, Norman Byfield Thomas, better known as Lord Flea, also played a signficant role in helping to popularise the genre abroad. Whereas Kitchener made his mark in the United Kingdom, Flea was credited with helping to start the calypso craze in the United States and was mainly responsible for popularising the Jamaican calypso style there. His style was mento, but was marketed in the US as calypso, as many Americans weren't familiar with the name 'Mento'.

On the local scene, Lord Flea and his calypsonians originally gained increasing popularity at local nightclubs like Adastra, Success, and Desperanza, a nightclub situated close to his Regent Street residence in West Kingston (where he was born) between 1932 and 1934. Flea recorded a few songs then with local businessmen Ken Khouri and Alec Durie, before being spotted at one of his performances by the American club owner, Bill Saxon, who was in the island searching for talent to work at his Florida venue.

The guitarist/singer/composer was originally offered a six-month contract to work with Saxon in the mid-1950s. Flea took full advantage of the opportunity by creating a calypso firestorm in the United States, establishing new house records with his band, Lord Flea and his calypsonians. The exciting aggregation, which included Count Spoon on drums and spoon; Prince Charles on timballi and tumba percussions; Fish Ray - one of the earliest exponents of the walking bass technique that succeeded the rhumba box; Pork Chops on banjo; and Flea himself on vocals/guitar, created ecstatic scenes at places like The Eden Rock Hotel, The Club Calypso, The Grey's Inn, The Dunes in Las Vegas and New York's Jamaica Room.

A February 1957 review by Billboard stated that "Flea has a dynamic drive" and that his calypso album - Swinging Calypso, produced "attention-grabbing sides which can stir action at all levels".

The 1950s calypso craze was extended into the movie world when Flea and his calypsonians appeared in two full-length movies in 1957 - Calypso Joe and Bop Girl goes Calypso, in which the 'Bop Girl' mentioned in the title, was persuaded to adopt the calypso style and abandon her previous Rock and Roll leanings. In the process, Flea established himself as Jamaica's first international superstar, ahead of Bob Marley, Jimmy Cliff, Desmond Dekker, Peter Tosh and others.

An exciting guitarist, a humorous writer of current happenings and a clever tongue-in-cheek exponent of rhythmic rhyme, Flea created calypsos that went to the heart of the Jamaican psyche. His landmark album, Swinging Calypso, done for the larger-than-life Capitol Records in 1957 was historic. It was the first by a Jamaican, and one of few Jamaicans, who had the privilege of being recorded by the monumental establishment.

Capitol Records viewed him then, as the answer to RCA's Harry Belafonte. On the track, Mister Give Me the Rent, from the Swinging Calypso album, Flea highlights the age-old problem between tenants and landlords. He spoke about an unreasonable landlady who offered poor accommodation - something common to tenants at the time - and one who is

"Too rude - in my affairs she likes to intrude".

No chair, no table.

This convenience is terrible.

And on the other part

no hotwater to take a bath.

A dirty sheet off of a blanket

and she have the audacity to tell me I'm living in luxury".

On the track, Calypso Bee-Bop, Flea gives credit to the song and to several jazz greats like Stan Kenton, Lionel Hampton, Charlie Parker, Miles Davis and Dizzy Gillespie, as he sang:

"This Bee-Bop music is really terrific.

I nearly went crazy, when I hear the records of Gillespie.

It really enchanted me, just to hear him play anthropology".

Although not indicating in which direction, it is understood, as Flea urges man to:

"Run, run, run, when you see a pretty woman.

When a man is in love it is so pitiful.

A woman will cover her face with wool.

Love is the common enemy,

the moon and stars is artillery.

When they attack you there is no retreat.

You won't lose your heart if you use your feet".

Some wise words taken from track number four (side 2) of the album Swinging Calypso, and titled, Pretty Woman, which was originally recorded by the legendary Edmundo Ross and his orchestra. The other two recordings of note from the album - both Flea's compositions, were Naughty Little Flea and The Monkey. The former was extensively covered, the most popular being done by the African singing queen, Mariam Makeba and Harry Belafonte. The latter saw Flea singing about the animal's habit of following him around and copying some of his actions:

"When I put on shoes, monkey wear shoes too.

I don't know what to say the monkey won't do".

Other cuts from the album were equally popular, along with others he did locally for Calypsodisc, Calypsotime, and Times record labels.

Thomas was diagnosed with Hodgkin's disease - a malignant disease of the lymphatic tissues, and admitted to Jackson Memorial Hospital in Miami, Florida where, (according to his daughter Cathie Way-Giddarie) he died in May 1959 at the tender age of 27.

Thomas' funeral procession was, at the time, the longest ever seen in Miami-Dade County.