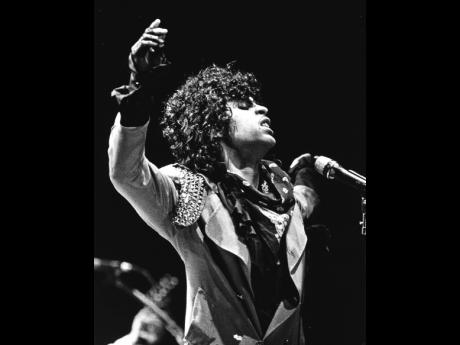 AP
In this March 17, 1983 photo, Prince appears at the Met Center in Minneapolis. Prince, widely acclaimed as one of the most inventive and influential musicians of his era with hits including ‘Little Red Corvette,’ ‘Let’s Go Crazy’ and ‘When Doves Cry’, was found dead at his home on Thursday, April 21, 2016, in suburban Minneapolis, according to his publicist. He was 57.

The late legendary singer, songwriter, multi-instrumentalist, record producer and actor, Prince, has taken over the Billboard charts this week with several of his previously released albums/singles climbing atop his musical competitors.

Prince, who recently died after an illustrious career, currently holds the number one and two spots on the Billboard Top 200 albums chart. His album titled, The Very Best of Prince, sits at number one, while the very popular Purple Rain, clings to the number-two spot. The other Prince albums in contention are The Hits/B-sides and 1999, which charted at numbers six and 31, respectively.

Prince's music, has also returned to the Billboard Hot 100 chart this week, peaking at number 17 with his hit single, Purple Rain.

Other Prince singles which saw improved sales and making it to the Billboard Hot 100 include Kiss, now at number 28.

As it relates to the Reggae Billboard chart, Alkaline's debut effort, New Level Unlocked, dropped from the top 10, after spending three weeks. It is however, noted, that there was no solo Jamaican artiste in the Billboard Reggae Top 10.