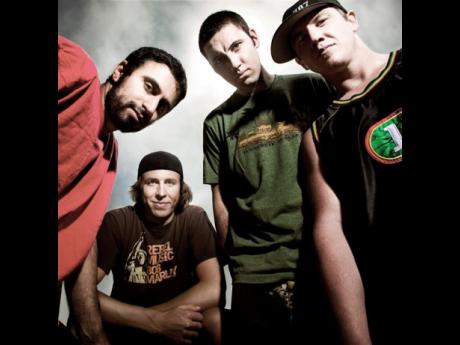 One afternoon last August, on a day off from touring with their band, Rebelution, drummer Wesley Finley and keyboardist Rory Carey stopped by Tampa's Cigar City Brewing for some drinks.

This was no ordinary tasting. Cigar City owner Joey Redner and his brewers were on hand, as were Kevin Lilly and Tony Casoria from Tampa's Rock Brothers Brewing. They were there to help brew the reggae-rock band its very own signature beer.

On the table was an array of brews in cups, bottles, cans and growlers Stone, Uinta, Ballast Point, Lagunitas as well as plenty of samples from Cigar City.

"The point now," Redner said, "is just to figure out your guys' wheelhouse."

At that meeting last August Carey and Finley went toe to toe with the Cigar City guys, breaking down specific hops and flavour profiles and describing their ideal beer an extremely dank, extremely hoppy west coast IPA. A beer, Carey told Redner, that "smells and tastes like weed".

Eight months later they've found it. Rebelution IPA will make its public debut when Rebelution headlines a day of reggae rock music on June 25 at Vinoy Park in St Petersburg. The Green, J Boog, Stick Figure, and Through the Roots are also on the bill for the show, which will double as Rebelution IPA's official release party.

This is the first IPA for Rock Brothers, a burgeoning music and craft beer empire headquartered in Tampa. In partnership with Cigar City they've created beers for 311, Hootie and the Blowfish and Umphrey's McGee, among others, and partners Lilly and Casoria are building a brewery and bar in Ybor City on the latest projected opening date - early September.

While Cigar City has been involved with Rebelution IPA from the start, this will be the first beer Rock Brothers has produced largely on its own. In a statement detailing the beer, Rock Brothers head brewer Eric Wannemacher described the beer as "the perfect harmony of ingredients. The pilsner and rye malts provide a crisp, refreshing and dry finish, while the fuggles (hops) and mosaic hops bring the tropical citrus and dense herb characteristics".

The beer was first tapped at a private Rebelution concert at Tampa's Hard Rock Cafe in March. It will be available on tap at select local bars immediately after the June concert; cans are expected to follow in July.

Within the band, Carey and Finley are the biggest beer guys, bringing growlers on tour and planning days off on tour around trips to craft breweries. Each has a cellar of hundreds of bottles back home in California. They're proficient in the language of beer production. Carey even home-brewed for a while back in college.

"Every day on our rider, it's local IPAs," Carey said. "If we have some that we really like, we'll pick that. But usually, we just want to find something new."

Rebelution IPA will end up coming in at a reasonable 7.5 per cent alcohol content to keep it appealing to a larger audience, "so the non-beer drinker can be at a festival and crush it," Carey said.