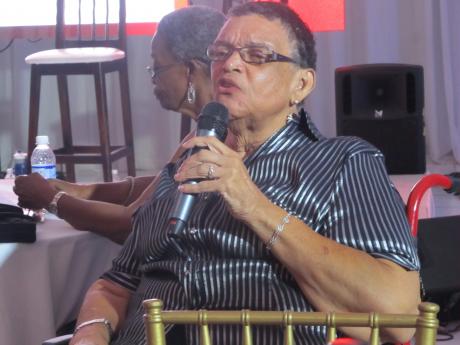 According to the good book, "Greater love hath no man than this, that a man lay down his life for his friend." While the members of the Campion College Alumni Association did not lay down their lives for a friend, what they have done, and promised to do, for their former teacher, Shelia Barrett, is truly an illustration of great love.

"We will never let you down, Miss B, and we will ensure that you are safe. That is a promise from the Campion College Alumni," David Silvera affirmed in his vote of thanks.

"We want to say thanks to Miss B for everything that she has done for us as Campionites. And although she taught a lot of us, she put a lot of us in our places, including me," he added, to the merriment of his former schoolmates.

Silvera was speaking at a fundraising event to help with ongoing medical expenses for the former Campion College history and economics teacher and vice-principal.

The event - dubbed 'An Evening of Excellence: A Culinary and Musical Experience' - was organised by the Campion College Alumni Association. It was held last Wednesday at the spacious Worthington Building, Spanish Court Hotel in New Kingston,

As full black-clad waiters and waitresses, complemented by the white decor, moved around tables and bar serving Jacqui Tyson's culinary delight to the diners, the artistes delivered their musical contributions.

Asnani opened on keyboard, but it was Royes-Browne who managed to get the class of reunions to pause their chattering with Ain't No Sunshine When He's Gone.

Subsequently, she gave other enjoyable performances of Crazy For You, Summertime and Fever.

Mario Evon opened his set with What's Going On. Along with Ordinary People and I'll Stay With You, he also treated the audience to two of his original pieces, This Day and Soul Tek.

Morgan, whose contribution was mainly accompanist for the vocalist, also showed off his musical skill in selections with a Bob Marley special.

And after performing two sets, the four musicians closed with a fine rendition of Roar.

But earlier in the programme, before the curtain came down, the lady of the moment, seated in wheelchair, expressed gratitude to her former pupils, some of whom she taught so long ago that they were now on a first name basis.

"You don't know me to be one to be at a loss for words, but it has been an emotional experience for me," she said.