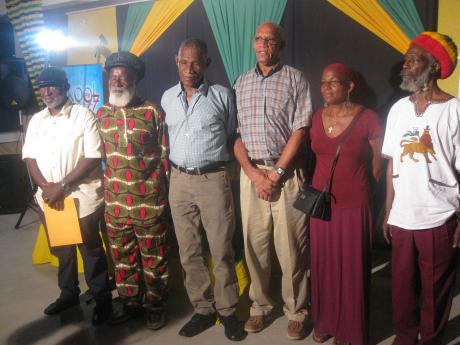 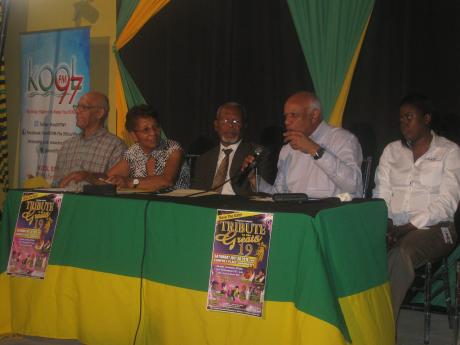 Mel Cooke
Keith Goodison (second right) speaks at the launch of Tribute to the Greats 19 on Tuesday evening, an event which Tribute to the Greats organiser Kingsley Goodison (left), Norma Brown-Bell (second left), guest speaker Silver Castro (centre) and Tricia Richardson of the CHASE Fund also participated. The launch was held at Bistro 19 in The Palms on Red Hills Road, St Andrew.
1
2

As Tribute to the Greats is an awards show honouring Jamaica's often-unheralded music pioneers, it is expected that there will be a summary of their achievements leading up to the event and an in-depth citation on the night.

At Tuesday's launch of the 19th staging, Kingsley 'King Omar' Goodison gave brief information on the awardees, but before that, Keith Goodison placed the group of awardees into the context of those who have preceded them - in more ways than one.

"One of the things that is notable about this staging is that you have two of the pioneers," Keith said. "The others seem to be successors to the original group," he said.

Appropriately, at Tribute to the Greats 19, which will be held at Curphey Place, Swallowfield, St Andrew, on July 30, there will be pioneer awards to trumpeters Raymond Harper (who died in the late 1990s) and Oswald 'Baba' Brooks. There will be lifetime achievement awards to the Browne family, Desmond Young (who is also president of the Jamaica Federation of Musicians), Anthony 'Sangie' Davis, Bernard Collins of The Abyssinians and Hector 'Bunny' Williams, with a special award to George Henry, owner and operator of Black Prince sound system.

DEVELOPMENT OF THE MUSIC

Guest speaker Silvera Castro briefly traced the development of Jamaican popular music, with names of performers such as Joe Hibbert, Leslie Thompson, Count Ossie, The Paragons, The Clarendonians, The Gaylads and The Wailers mentioned along the timeline. However, Castro said, "throughout our history we have never really recognised the creativity, the genius of our musicians".

However, he said, while "the majority of Jamaicans tend to see music as an extra discipline that is not important to our society, this needs to change and it seems to be changing."

He duly gave the Tribute to the Greats organisers credit for honouring the persons they have in the previous 18 stagings and those who will be recognised on the 19th. Castro also encouraged corporate Jamaica, to give a more meaningful contribution to initiatives like Tribute to the Greats. "Don't just piggyback on the talent. Invest in the music," he encouraged.

Kingsley Goodison gave a rundown of the awardees, but also looked at the development of Jamaican popular music from another perspective.

"Growing up on Orange Street, close to Prince Buster and all those people, when the Jamaican music started to come of age at that stage, a lot of long-time journalists wanted to style it as 'gully music', 'one-chord music', 'two-chord music'," he said.

"This idea came to me when I saw how destitute some of those who made some of the big songs were. I said, these guys, it is not so much about the money but the 'smaddification', as Rex Nettleford said. I said I am going to do something about it."

Kingsley said that at "the time it started, I saw the reaction of the guys. When they got the certificate, they were so proud."

Norma Brown hosted the launch, while Tricia Richardson of the CHASE Fund asked for blessings on the event.