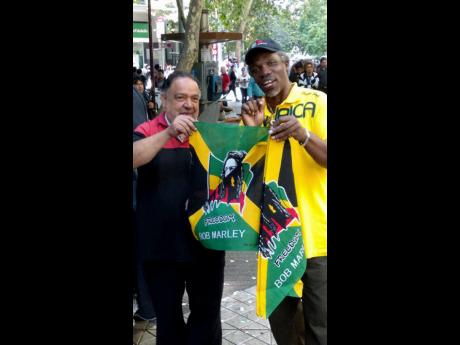 Contributed
The Gleaner's Adrian Frater (right) with a vendor in Santiago, Chile, who was selling items related to Bob Marley and Jamaica. 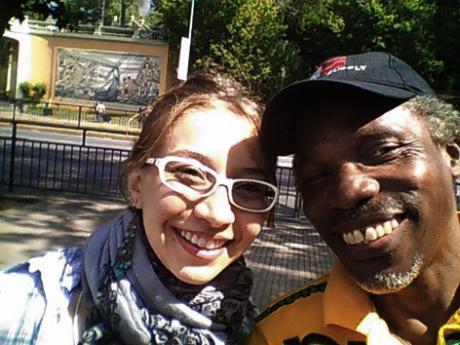 Contributed
Adrian Frater (right) with a young lady in Santiago, Chile, who reacted positively to Bob Marley and Jamaica. 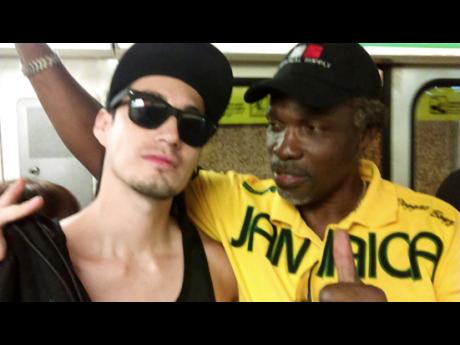 The pulsating reggae-flavoured beat floating through the train in the underground tunnels of the Metro subway in Santiago, Chile, immediately caught my attention. And so did a red, gold and green knapsack with a picture of Jamaican icon Bob Marley, puffing on one of his trademark giant ganja spliffs.

The lanky singer with the raspy voice who had curly dreadlocks scattered over the exposed part of his head, was South American Indian, but at first glance, he could have been mistaken for British deejay Dominic. He had the full attention of passengers as his voice flowed melodiously, assisted by the microphone, small amplifier and speaker box he had attached to his guitar.

I almost forgot that I had arrived in Chile only 24 hours earlier and needed to pay keen attention to the various stops because, should I miss the St Lucia station - a destination I knew only by name - I would be lost in a Spanish-speaking city where I was a complete stranger with only a limited grasp of the language.

After the young man sang his final note, pulled out a cup and began collecting contributions from passengers, I approached him. I pointed to his colourful knapsack and asked, "Do you speak English?" He shook his head in a somewhat dismissive manner, albeit scrutinising me closely.

I said, "Jamaica," patting the chest of the Reggae Boyz shirt I was wearing, which had 'Jamaica' printed boldly in black.

The man's half-smirk quickly made way for a broad grin and a hand of friendship was promptly extended. "Jamaica ... Bob Marley ... viva Jamaica! viva Bob Marley," he said, as his smile got brighter. I quickly pulled out my smartphone and asked a fellow passenger to snap a photograph of us.

When the singer got to his stop, he again extended his hand, remarking again "Bob Marley ... viva Jamaica!" before walking away while giving me the thumbs up.

After I emerged from the subway in St Lucia, my attention was immediately captured by the numerous historical monuments, including an impressive statue of Latin American hero SimÛn BolÌvar.

I again whipped out my smartphone and began snapping photographs. After a while, I decided it was time to find the shopping mall, which I was told had excellent souvenirs. I beckoned to a young lady, who was standing close by and enquired whether or not she spoke English. She replied, "little English," giving me the 'head to foot' suspicious stare.

As I did on the subway I patted the writing on my shirt and said, "Jamaica." Her face lit up and she said. "Bob Marley ... Usain Bolt ... fastest man in world." She suddenly became quite polite, blending English and Spanish to provide the needed information. I got another passer-by to snap a photograph of us sitting together. We had become friends without really knowing each other.

As I entered the shopping zone, I began looking around for a cambio to convert my US dollars to pesos. I was told that the cambios offered a much better rate than the banks and souvenir shop operators. While heading in the direction of a cambio I, walked smack into the middle of a demonstration, featuring scores of persons blowing vuvuzelas and chanting as they waved placards covered with text and drawings. As I looked on, I saw a trolley laden with Bob Marley memorabilia on the side of the street.

After I concluded my shopping, I decided to take a taxi back to my hotel instead of chancing another subway trip. The radio in the cab was playing Bob Marley's Buffalo Soldier and the Spanish-speaking driver (who only moments early had difficulties understanding my English) was singing "Baffalo soldier ... dreadlocks Rasta ... fighting for survival ... ."

I turned to him and said, "Bob Marley ... Jamaica," touching the 'Jamaica' written on my shirt. He smiled, gave me the 'thumbs up' and said "Bob Marley bueno, bueno!" as his smile broadened ... While we could not communicate further, when I got to the hotel, he bade me farewell with a big smile as though we were old friends.

As I got into the hotel and began reflecting on the various encounters I had throughout the day, the greatness of Bob Marley and his global impact dawned on me. Decades after his passing, the man remains larger than life - despite the language barrier and all.