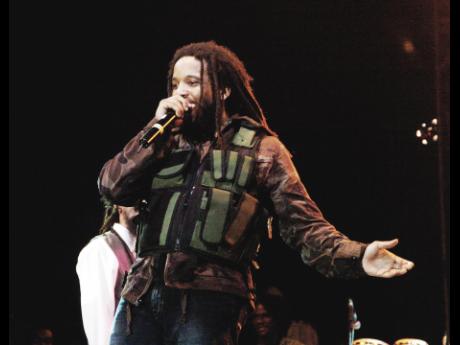 American band Rebelution can hardly complain that their Falling Into Place set has fallen a place on the Billboard Reggae Albums Chart for the week of December 3, 2016.

For while it has been replaced at the top of the listing, the usurper is another Rebelution album, Live at Red Rocks, which was second last week.

And although his Revelation Part II: The Fruit of Life set has not broken Rebelution's hold on the top two spots for two weeks running, Stephen Marley can hardly complain about his number-three ranking. Not when it is the week's greatest gainer, hauling its way back up from seventh spot in its 17th week on the chart.

Marley's set is one of two by Jamaicans in the upper quintet; the other is Beenie Man's Unstoppable, at five, just behind Set in Stone (Stick Figure). Both have been pushed down a place from last week's position by The Fruit of Life's resurgence.

At the very end of the top 10, Ziggy Marley (and that is both the album and the singer's name) has had another lease on life in the Billboard's top double handful of reggae albums. After a half year on the chart, the album has recovered ground from its 13th position the previous week.

CLOSE TO THE PAIR

Nothing More To Say (The Frightnrs) is part of the shift created by Stephen Marley's strong gain, currently sitting at number six after losing a place from last week's ranking. Two gainers - Golden (The Movement), up from last week's number 11, and Wandering Soul (HIRIE), up a notch from number nine, are at seven and eight, respectively.

Shifta X CheNelle's EP, You & I, is ninth, down three places from its peak position of sixth.

On the iTunes Top 100 Reggae Albums chart, as of Friday morning, J Boog's (who was recently in Jamaica) Wash House Ting continues to hold the number one spot. This puts Bob Marley and the Wailers with their Legend pair (one is remastered and the other deluxe) in the unaccustomed position of being second and third, respectively.

Not only that, but the Gong and his band do not have only one other album in the top 10, as Gold, which tends to be always close to the Legend pair, is at number 10.

Rebelution's Falling Into Place (second on the Billboard listing) is at number four, while positions five to seven - Live at the Belly Up (Dubbest), The Best Yet (Josh Heinrichs) and Peace of Mind (Rebelution), respectively - are occupied by albums which do not have a top 10 Billboard Reggae Charts presence.

The Billboard leader, Rebelution's Live at Red Rocks, is eighth, while the various artistes compilation, Strictly the Best, Vol 55, is ninth.