All Set For Third World And Family 'Under The Stars' 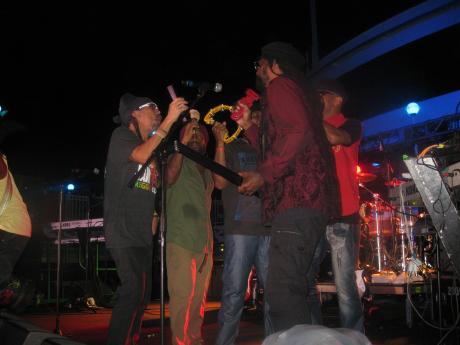 File
Members of Third World Band gather around a microphone playing percussion instruments on the 2015 Welcome to Jamrock Reggae Cruise.

Legendary reggae band Third World is putting the final touches on Third World and Family Under the Stars, a benefit concert they have dubbed 'the event of the season'.

Set for Hope Zoo on December 2, the event is already shaping up to be a big one.

"It's really four hours full of music with Third World on stage throughout the night," said Heather Cameron, band manager. "It's going to be five different generations of artistes from the '70s, '80s, and '90s up to the 2000s. We're going to be representing five decades of music in one night."

Although Third World is an integral part of this year's staging of the event, they were just performers last year, but after seeing how successful the event was, the band decided to partner with Stush Rootz, the team responsible for planning and executing last year's edition of the event.

"We did the show with them last year and we enjoyed what we did, so we decided to carry it to a different level," Cat Coore of Third World explained. "Third World hasn't had its Third World and Friends show for quite a few years, and it was quite popular, so this year, we decided to team up with them to help out two charities, Children First and Alligator Head, which is the charity that Third World is associated with."

Coore went on to say that the event, being hosted in aid of different charities, was also one of the main reasons behind the band's decision to partner.

The Sunday Gleaner spoke with Kanna Coore, a member of Stush Rootz, who explained that charity is a big part of their organisation. She also said that the aim of the annual concert is to help a new charity every year but pointed out that the charity must aid children in some way.

Last year, Stush Rootz (the parent group that leads the Reach Academy Development and Outreach Programme) was able to raise sufficient funds to gift the Jacks Hill Infant and Primary School with new kitchen appliances, as well as school books for Kindergarten to Grade 3. This year, the concert will benefit Children First and the Alligator Head Foundation.

Children First is an organisation based in Spanish Town that uses skills training, remedial education, and developmental approaches to provide life-changing programmes for children and adolescents. Alligator Head Foundation is a private foundation established to manage the East Portland Special Fishery Conservation Area to promote the development of sustainable livelihoods and the use of art, music, and other cultural expression as a tool in environmental conservation.

Tickets for the concert will cost $5,000 a piece and are available at Pita Grill, CPJ, Cannonball (Sovereign North and Manor Park), Fontana (Kingston, Ocho Rios, Montego Bay), Texaco Mary Brown's Corner, Reach Academy, Building Blocks, and online at stushrootz.com. The concert is expected to get under way at 8 p.m. sharp.