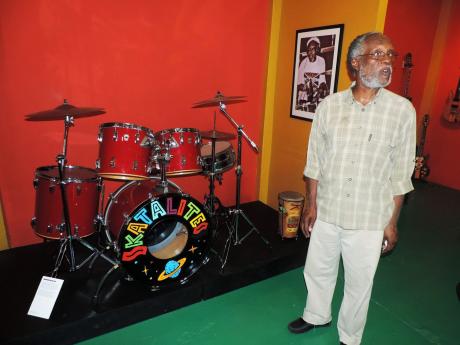 Mel Cooke
Herbie Miller, director/curator of the Jamaica Music Museum, with the drum set donated by Skatalites drummer Lloyd Knibb which is displayed in the current exhibition. 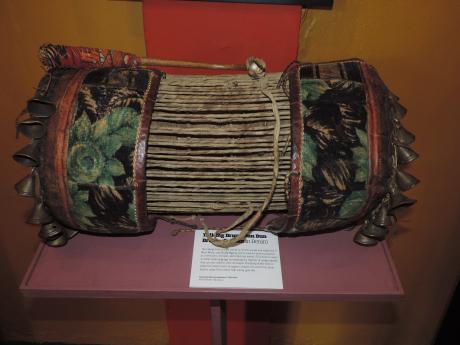 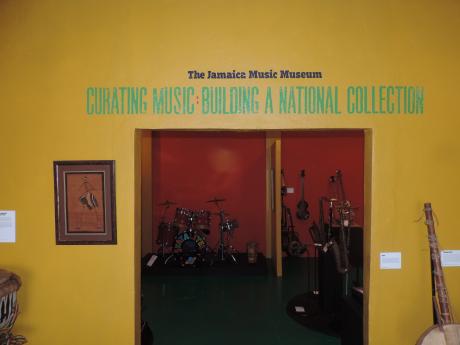 Mel Cooke
The name of the current Jamaica Music Museum exhibition at the Institute of Jamaica, East Street, Kingston, inside the space where it is being housed. 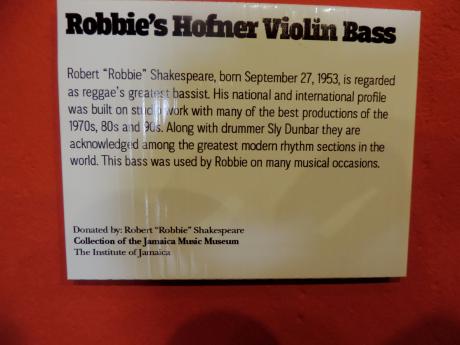 Mel Cooke
The notes on the Hofner Violin Bass Guitar, donated to the Jamaica Music Museum by Robbie Shakespeare. 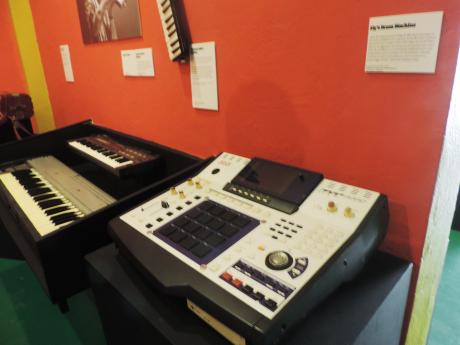 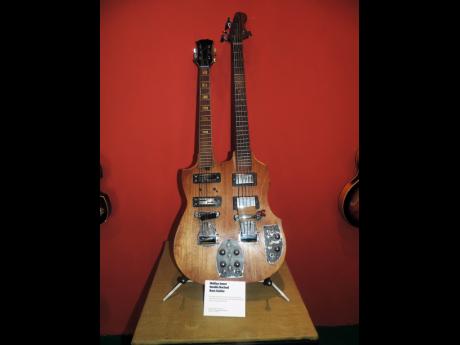 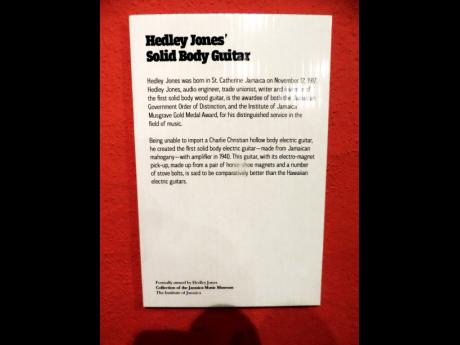 Mel Cooke
The information for Hedley Jones' Solid Body Guitar, the only instrument which had been collected specifically for the Jamaica Music Museum eight years ago when Herbie Miller became its director/curator.
1
2
3
4
5
6
7

As he walks into the building at the Institute of Jamaica on East Street, Kingston, where the current Jamaica Music Museum exhibition is housed, a line creases the brow of the museum's director/curator, Herbie Miller. It is not caused by the change of lighting from early afternoon sun to shadow, but the out-of-position paper with information at the base of the drum which takes front and centre place inside the entrance.

Miller aligns the white card with black writing just right, ruing "signs of interference" as he makes similar minute movements to the cards below other items on display in the first of the two rooms. Here kente cloth, a talking drum and a strum strum, among other instruments, reflect a musical heritage preceding the arrival of the people who came to compose Jamaica as we know it.

Going into the second room requires passing under the name of the exhibition on a wall - Curating Music: Towards Building a National Collection. It is in this second room where instruments which have made much of Jamaica's much-storied music are on display.

Miller points out that when he took charge of the Jamaica Music Museum eight years ago, there was one instrument specific to the museum - a solid body guitar from musician and inventor Hedley Jones (who received a Gold Musgrave Medal from the Institute of Jamaica in 2011). Other items were acquired in the ongoing process of building a national collection, and Miller readily connects the inflow to not only persons being interested in developing the Jamaica Music Museum, but also his longstanding personal connections within the Jamaican music industry.

It is not surprising, then, that he has a story of acquisition for many of the pieces, tales which delve into a history and generosity beyond information on the brief notes which he had adjusted earlier. The last tale on the tour of the exhibition is the most touching.

Having heard from drummer Sly Dunbar (whose Akai drum machine, one of several donations to the Jamaica Music Museum, is included in Curating Music) that Skatalites drummer Lloyd Knibb was very ill, Miller made contact with Knibb, who said he was on his way to Kingston.

He said: "Herbie, I am going to die in two days' time, but I am coming to Jamaica."

Knibb wanted to donate the drum set and instructed Miller: "Go to Harbour View. My family is expecting you. They know the drums are going to the Jamaica Music Museum."

Miller did as was requested and the drum set was handed over.

"A few days later, I got a call that he was in Harbour View and I must come."

Miller went to Knibb's house with Skatalites bassist Lloyd Brevett. Knibb told them he would die the next day and at 6:56 p.m., Miller received a call to return to Harbour View.

"I went there, and he passed just as I was going through the gate," Miller said.

Other acquisition tales are not as emotive but are no less involved as they demonstrate the connections which have facilitated the museum's burgeoning collection. Miller relates how someone came to the Institute of Jamaica and was taken on a tour of the then mini-display, which covered from plantation life to dancehall in what The Sunday Gleaner summed up as 22 yards of Jamaica's history. After the tour, he said his father was saxophonist Sammy Ismay and later attended an event in the Jamaica Music Museum's Grounation series, which is held each February. He carried an onion bag which contained his father's saxophone, sheet music, poetry and more.

And even as he rattles off the names of persons instrumental in the donation of instruments, whose names may not be on cards like those he painstakingly adjusted (Jimmy Moss-Solomon helped get Vernon 'Mullo' Moller's trombone into the museum's collection), Miller emphasises that the instruments are important - true museum pieces - because of their history. So there is a story about a bass guitar acquired by producer Bunny 'Striker' Lee for Aston 'Familyman' Barrett, which was then passed on to Robbie Shakespeare, who Miller described as "no ordinary Jamaican".

They are all extraordinary Jamaicans represented in Curating Music: Towards Building a National Collection, among them Ernie Ranglin, Clinton Hutton, Larry McDonald, Dizzy Moore, Everald Brown, Chinna Smith and Adina Edwards. There are other names connected with the instruments on display - Tommy Cowan and Buddy Pouyatt included.

Miller said with the exhibition, the intention is to encourage visitors and let the public know "we are in the process of building our institution, the Jamaica Music Museum. We can only build that if we have benefactors, contributors to the process".

However, even as the Jamaica Music Museum builds its collection, the physical space that it is afforded is painfully inadequate. Among the many items not on display are Dermott Hussey's collection and an amplifier from Jah Love sound system. As Miller puts it succinctly, "space is limited".

He said that if we are to leave a lasting impression of who we are and show our respect for what we have created, we have to leave the future on solid ground.

Still, ahead of a suitable building is obtained for the Jamaica Music Museum, Miller said: "We will utilise every space until then."