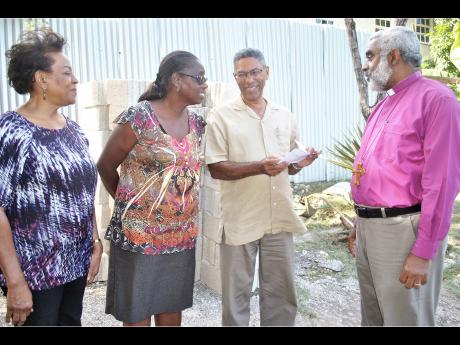 Contributed
Mr. Raphael "Keith" Sangster (second right), Chairman, and Miss Delores Bailey (second left), Superintendent of the Wortley Home for Girls, receive a J$150,000 donation towards reconstruction of the Home which was destroyed by fire in June 2015. The contribution, which represents the proceeds from the Diocesan Festival Choir's Anniversary Concert, was presented on Monday, November 21 by the Rt. Rev. Robert Thompson, Chairman of the Management Committee. Wortley Home Board Member, Mrs. Marva Greig (left), shares in the happy occasion.

The Wortley Home for Girls and victims of Hurricane Matthew in Haiti will be the beneficiaries of proceeds from this year's Diocesan Festival Choir Christmas concerts.

The 91-year-old choir had a scheduled performance on Sunday at the University Chapel, Mona and is set to perform again on December 4, under the baton of accomplished director Geoffrey Shields, at the Kingston Parish Church.

Dubbed the 'Magic of Christmas', the concert series feature excerpts from Handel's Messiah (The Christmas section), other seasonal favourites and Negro spirituals, as well as performances by Jamaican virtuoso Paulette Bellamy, who will lead the instrumental group, Touch of Elegance. Dr Richard Beckford, professor of music at South Carolina State University, will be guest organist. Rounding out the package is mezzo soprano Dawn Fuller-Philips.

Shields promises that the concerts will launch the festive season with a musical bang.

"This year, we have an exciting blend of pieces we've never performed before, including choruses that have thrilled audiences worldwide for ages," said the director who has led the choir for two years, and whose keen musical ear and creativity are legendary. "Last year was a success and we have raised the bar further," affirmed Shields.

Bellamy, whose career began at the age of four, is wonderfully versatile. She is a brilliant pianist, violinist, composer and arranger. Beckford, the 1983 Associated Board of the Royal Schools of Music West Indies scholar, has presented organ recitals in Nassau, Belgium, the United States, Europe and Jamaica, and has also had television appearances on the British Broadcasting Corporation programme, 'Songs of Praise.'

Fuller-Philips has delighted Jamaican audiences with her performances on stage with the National Dance Theatre Company and with the Diocesan Festival Choir.

The Magic of Christmas concerts are being presented under the distinguished patronage of the Venerable Dr Alvin Stone, retired Anglican Archdeacon of Kingston, and Mrs Stone. The December 4 concert is set to begin at 5 p.m.