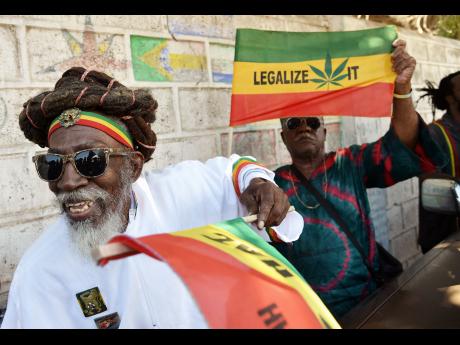 File
Bunny Wailer, at the Trench town culture yard, after a march through the Corporate Area in support of the legalisation of marijuana.

Tomorrow, April 10, is the 70th birthday of Neville 'Bunny Wailer' Livingston, OJ. Part of the celebratory activities is the launch of the RASPECT Cause Campaign A Jamaica/South Africa collaboration on ganja rights, for which Bunny Wailer is the ambassador. It is an appropriate time to tell the story of his song Fighting Against Convictions, which Wailer first told to The Sunday Gleaner in May 2010.

Bunny Wailer's Fighting Against Convictions (popularly known as Battering Down Sentence), was written while he was serving an 18-month sentence for marijuana at the Richmond Prison Farm in St Mary and is the second song on his classic 1976 album, Blackheart Man.

Bunny Wailer sings about the background of extreme poverty ("I find myself growing in an environment /Where finding food is just as hard as paying the rent"); the frustration of city life ("In a family of 10 and raised in the ghetto/Hustling is the only education I know/Can't grow no crops in this concrete jungle") and the inevitability of being caught ("As skilful as I am, the jailer-man is bound to find me/I pray the day will come when I shall be free from/Battering down sentence, fighting against convictions").

It comes out of his stint in prison, Wailer telling The Sunday Gleaner, "in 1967, I was falsely (and Wailer pauses before going on) charged with ganja, tried for ganja, sentenced for ganja."

Explaining that in those days, there was an automatic 18-month sentence for marijuana, he said, "that was Toots sentence too. That was Carl Dawkins too. Couple other artiste". He went through the system, moved from Half-Way Tree lock-up to the then General Penitentiary and then to Richmond Farm, which he describes as a "dormitory kind of prison".

"The song was suppen weh I did really, really haffi sey suppen on behalf of just not myself, but all youths weh expose to this condition, weh dem always haffi a batter down sentence an' a fight 'gainst conviction, whether to avoid it or to go through with the process after being penalised. Maybe if I never went to prison, that song would never have been. So out of evil sometimes come good."

Fighting Against Convictions, was written at Richmond Farm, where the first persons to hear it were his appreciative fellow inmates. However, the guards did not appreciate what they overheard.

"We have guitar and we play music a evening time just to take away the stress of prison. Singing other songs alright with the authorities, but when we sing da one deh, the authorities always send come sey 'don't sing that one'. Because it might have a effect on certain people who can't control themselves and make them run weh from the prison, so it woulda be like me a incite prison escape. Me still haffi sing it sometimes, cause the man them reques' it," he said.

Fighting Against Convictions, was recorded at Aquarius Studio in Half-Way Tree, St Andrew, where most of Blackheart Man, was laid down. It came out as a single before the album, then was re-recorded for the album.

"The 45 was loved by the people," Bunny Wailer said, "but as I say, the system nah go waan play that too much on radio, because it relate to what it relate to an' them waan look right all the while. It was a song where people in the street, ordinary people, them love it, because a lot of people been through prison and the song is one of them song and still is one of them song that when me pull it onstage, it create a thing. Anytime me draw that song onstage, it come in like Dreamland or Blackheart Man or any of them song that really appeal to the people. The people them respond to it serious. All three time me have to pull it up," Bunny Wailer said.