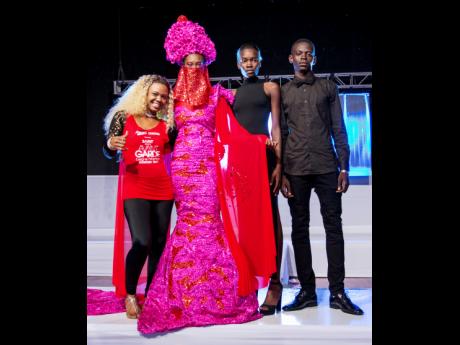 Fashion designer Cecilia Davana is wearing a big smile these days. She recently copped the award for Avant-Garde Designer of the Year at the Courtleigh Auditorium last Saturday, as Saint International crowned its Male and Female Fashion Face of the Caribbean winners.

"This is my second time winning, as I won in 2012, but this one feels so much more special. A lot of people call me a 'magician', but I would always joke that I am a fashion genie, so for me to take this concept and make it flesh, is very gratifying to me," the designer, whose real name is Cecilia Iman Bucknor, said.

Bucknor, known in local fashion circles as Cecilia Davana, bested 13 designers with her creation 'Fashion Genie' which captivated the judges and wowed the audience. The costume was modelled by the statuesque Deneil Littyle.

The win marked a journey that began several years ago, when she fell in love with fashion while in grade nine at Meadowbrook High School. It was then that she told friends that she wanted to become a designer. However, fashion had to compete with a jealous mistress - music. While in high school, she was a member of a group called Step Sisters. But the group soon broke up and the members went their separate ways.

After spending time in England, Davana returned to Jamaica, where she earned a diploma as a graduate of Kaju's Fashion Institute. After graduating, she created a clothing brand called Awahsuh, a fashion line that ranges from T-shirts to women's formal wear. 'Awahsuh' is a Jamaican expression, which means, "What is this?" ,

She then began to dabble in dancehall music as an artiste known as Baby Doll, hanging out at studios with Vybz Kartel and the early edition of the Portmore Empire.

"I really loved music, but it was hard to make it in the Empire without compromising myself, and I had too much respect and pride to do certain things, so I walked away," she said.

Free now to serve one master, she poured the essence of her soul into fashion.

"I tried to juggle both, but it wouldn't work," said Davana.

Davana concentrated all her considerable efforts on making the Awahsuh brand ubiquitous. It has been featured on numerous major events, including Saints International Fashion Face of the Caribbean, Saints Style Week, the St Maarten Music Awards, and local entertainment events.

"The brand has been copyrighted from 2005 to Ceedens Company Limited, a garment factory started by my mom. My sister and I are part-owners," she said.

She has also maintained her links with the local music industry.

In 2013, she landed an endorsement deal with dancehall artiste Wasp, making him the official campaign face of the Awahsuh male line. She has also worked closely with entertainers Vanessa Bling, Stacious, and Denyque. But the mainstay of her business is producing ties, physical education gears and uniform crests for a number of high schools in urban and rural Jamaica.

"This year, we did quite a few KC shirts for Champs, shirts with the tagline, 'The Brave Never Yield'," she said.

She urged young people to follow their dreams, despite whatever obstacles.

"Be fearless in the pursuit of what sets your soul on fire," she said.