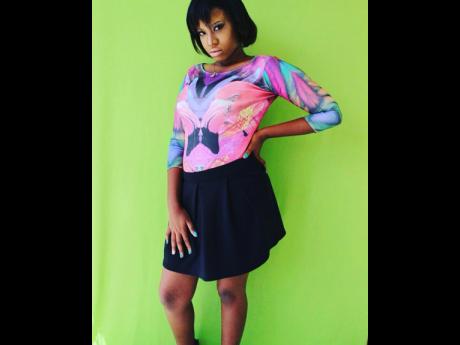 Bridgeport High School fifth-former, 17-year-old Trishauna Darby, is using her voice to champion the cause of education.

Recording under the moniker Pinky Famous - a spin-off from her father Oneil Famous, who is also an artiste - Darby recorded the single We Need Justice, a song which speaks about violence against children and their safety.

We Need Justice is one of 18 singles featured on the album Help Educate the Youth, and recorded on the PALAS Riddim.

All proceeds from the sale will be going towards the Peace and Love Academic Scholarship (PALAS) fund.

Darby said she got involved with the project as her manager, Jason Grant, and PALAS founder, Rula Brown, are great friends and he wanted to help the cause and assist as many needy students as possible.

"After the project was introduced to us, we agreed, wrote and recorded the song at my father's studio, and a couple days after, we did a video," she said.

Darby, who says she takes her education "very seriously", also wants to see other students given the same opportunity to pursue theirs.

Singing since the age of four, Darby started recording on a professional level at age 11, influenced by her father and his love of music.

"My father is definitely my most admired person in music. He taught me everything I know and he has done his best to educate and support my dream of becoming a musical success," she said.

So far, Darby has released a few tracks and also her self-titled EP, Pinky Famous, featuring songs Heartbreaker, Silly, Your Love and World Love, among others.

With music being a part of her life, Darby said it is not always easy striking that balance between schoolwork and her musical career. It is, however, something she manages to do through encouragement from friends, family and her management team.

"My aim to achieve the best remains my personal motto," she said about her goals.

Living in Portmore, Darby said her lifetime dream is to become a medical doctor as well as a music superstar.

Looking ahead, she said her management team is now doing a market research on the feasibility of her releasing her official album in August of this year.