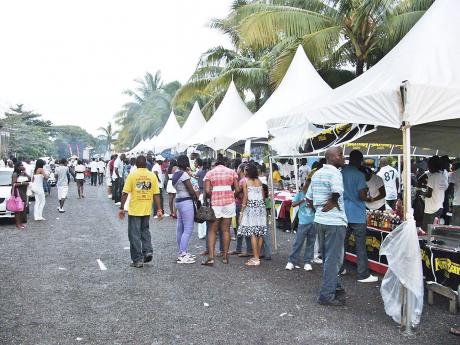 File
The food court at a previous staging of the Ocho Rios Seafood Festival.

After a one-year break, the Ocho Rios Seafood Festival returns to its familiar turf at Turtle River Park on Emancipation Day, Tuesday, August 1.

The festival, which will be staged by Dynamic Events Services, will be launched next month at Usain Bolt's Tracks and Records in Pineapple Place, Ocho Rios.

Having struggled to gain major sponsorship in previous years, the show has received a major boost this time around, as it will be backed by both the Jamaica Tourist Board (JTB) and the Ministry of Culture and Entertainment.

Additionally, the event is also part of the Ministry of Tourism's quest to move Jamaica into the lucrative global gastronomy market and will be used as a template for future gastro-tourism events.

"The Ocho Rios Seafood Festival is traditionally one of the biggest culinary shows in Jamaica," said Mortimer Martin, marketing consultant, in a release.

"Having both the Jamaica Tourist Board and the Culture and Entertainment ministries on board is not only a major boost, but can be viewed within the context that we will have something very special on our hands this year."

Martin also promised that Ocho Rios Seafood Festival 2017 will be "the Grand Gala of the Emancipation/ Independence holidays on the north coast".

"With the recent push by the Ministry of Tourism to use gastronomy as a pull factor to tap into what is now a very lucrative tourism market worldwide, we feel the Ocho Rios Seafood Festival can be one of those marquee events that can have a positive impact," Martin added. "Annually, the event has been able to attract a large number of overseas visitors and has positioned itself as an enhancer of the tourism product."

With the festival usually attracting wide participation from chefs, especially from along the north coast, efforts are being made to lure United States-based food and travel channels to take an interest in the event. Martin said this involvement would give the event an international presence.

To match the improved status of the festival, plans are afoot to include a first-class entertainment package to further boost the show. This is expected to include attractions for both young and mature audiences.

In previous years, the event has attracted top names in reggae and dancehall.

"This will be the ultimate family event with a little bit of everything for everybody," Martin assured.