For the Reckord | Plays reflect on C'bean with laughter, real tears 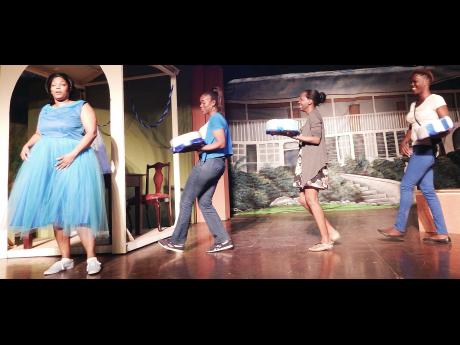 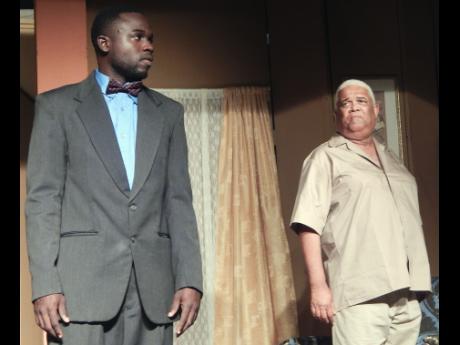 Michael Reckord
A tense moment between Glenmore (Kevoy Burton, left) and Mas Aaron (Volier Johnson) as a secret is about to be revealed in ‘Country Wedding’. 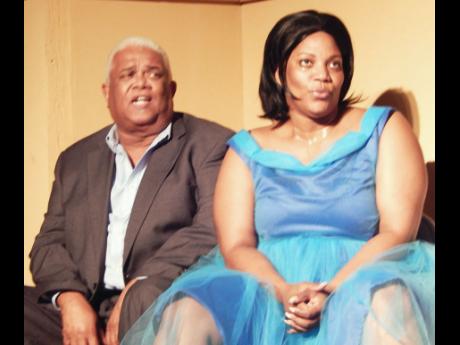 Michael Reckord
Mas Aaron (Volier Johnson, left) and Nella (Dahlia Harris) are at odds in this scene from ‘Country Wedding’. 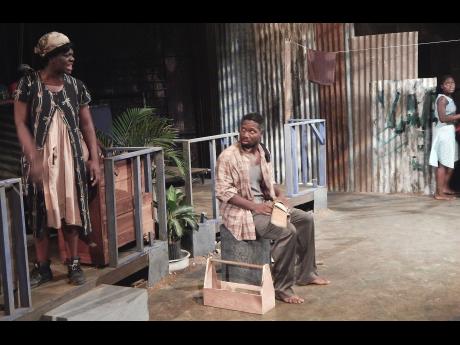 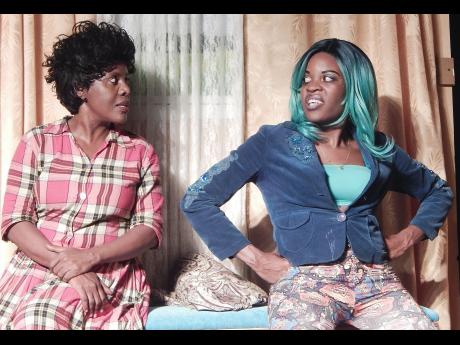 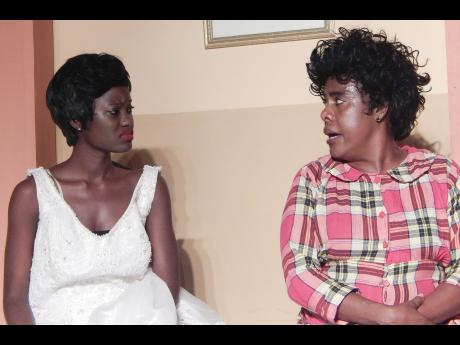 The last two productions I saw took audiences back to the middle of the last century, one in a serious way and the other comically. The former, Errol John's Moon on a Rainbow Shawl, a production of the Edna Manley College's School of Drama, has closed. You can still see Dahlia Harris' Country Wedding at the Phoenix Theatre, Haining Road, New Kingston.

Set in Trinidad during the post-war 1940s, Moon on a Rainbow Shawl won first prize in The Observer's 1957 playwriting competition and, after a provincial tour, opened the following year in London's Royal Court Theatre. It was first staged in New York in 1962 with a cast that included James Earl Jones and Cicely Tyson, and has become one of the most performed Caribbean plays.

Director of the drama school's production, Eugene Williams, saw the characters' "suffocating entrapment by poverty, colonial determinism and the effects of the early geopolitics of American military intervention [as being] juxtaposed with their various quests for a better life."

Living in a tenement yard realistically designed and meticulously furnished by Williams and Bryony May Kummer-Seddon, those characters include Ephraim (played by Jason Richards), his pregnant girlfriend, Rosa (Alandrea Reynolds); and Sophia Adams (Fredreeka Smith). The last has three responsibilities (burdens, really, because of the poverty) - her husband, Charlie (Neil Waithe), her preteen daughter, Esther (Sydia Fraser, when I saw the show) and a baby.

Williams was able to blend the talents of second- and third-year students with guest performers into a totally believable group of the downtrodden. Down but not out are Ephraim, who is planning to flee to England; Esther, who has won a scholarship and hopes to go to high school; and Mavis, the feisty prostitute who not only manages to bring home an American sailor or soldier (Thomas Trainer) most nights, but also get an engagement ring out of her feckless boyfriend, Prince (Nicholas Amore).

Watching the production was like looking over an inner-city zinc fence into an actual yard, with residents living pain-filled lives. At curtain call, the audience was able to disengage their emotions and give the cast well-deserved, enthusiastic applause. Williams told me he was proud of the actors who "grew a lot throughout the (rehearsal) process".

As well as being the author of Country Wedding, Harris is also the producer, director and an actress. In all those roles Harris has one intention - to entertain. Speaking through the mouth of one character, she declares contemporary Jamaica much too violent to have fun and magically transports us back to 1950.

She drew on the skills of three musicians, Marjorie Whylie (as musicologist), Leighton Jones (as musical director), and Jon Williams (as arranger), two choreographers (Kevin Moore and Devon Harriott), two costume designers (Marie Lovelock and Colieth Crooks) and a light and sound designer (Aisha Robinson). The result is a show that is, in those technical areas, a joy to look at and listen to.

She also directs and acts with laughs in mind. The laughs do come, though, unfortunately, two of the actors cause the audience to laugh at, rather than with, them. While the others internalise their characters and act in a realistic comic style, Dacoda Mitchell (as Slimmaz) and Anthony Mercurius (as artiste) exaggerate their characters in 'roots' fashion, thus pulling the style of the show in two different directions.

Apart from that the acting is excellent, and there is an emotional scene between Mabel (Deon Silvera) and Belle (Shantol Jackson), as they reunite after many years, which involves the shedding of real tears. That scene alone is worth the admission price.

Though the trip to the past is the stuff of fantasy, what happens there has an authenticity which was guided, Harris told me, by thorough research in the Louise Bennett-Coverley archives at the National Library.