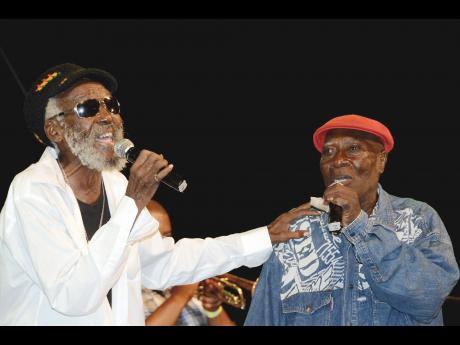 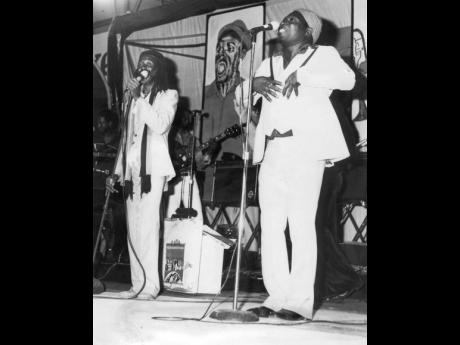 Gleaner Photo
The duo Bunny and Scully performing back in the day.
1
2

Arthur 'Bunny' Robinson, of the musical duo, Bunny and Scully has died.

Bunny passed away at the University Hospital of the West Indies (Mona) yesterday morning. This comes approximately two months after his musical partner Scully, died at home on Maxfield Avenue in February.

In a Gleaner interview shortly after the passing of his friend Scully, Bunny revealed that he was not well.

"For months, both of us were sick. Me, myself, not so well," he said at the time. The singer was diagnosed with cancer of the bones in 2013 and had been battling the illness since then.

Industry insiders have been reacting to the news, dubbing the singer's passing as another blow to the industry.

Veteran producer and promoter Mikey Bennett, told The Gleaner, that Bunny would be missed, especially because of his professional approach to the music.

"He and Scully were in the business for a long time. They started off as Simms and Robinson, before they became known as Scully and Bunny," he said. "They were both talented singers, and Bunny was very professional. He was very easy-going, always running jokes, but very serious when it comes on to his work." Bennett noted that Bunny's professional approach to the business of music carried over into his regular job as a peanut vendor. "He was known as the original peanut man because he used to sell at all the big events at the National Stadium, Sabina Park, everywhere," he expressed. "Even after he found the music, he never stopped selling peanuts and he was never ashamed of it. He took it very serious and everyone knew him as the peanut vendor who sang."

Rennie Taylor, an executive member of the Jamaica Vintage Artiste Association (JAVAA), shared similar sentiments. While remembering Bunny for his wit and his encouraging spirit, Taylor pointed out that the industry is losing its veterans at a fast rate.

"This is very hard. I cried when I heard. We are losing them very often," he said. "He was a jovial person who was always encouraging me, and he will be missed."

With songs such as Feel So Good, Don't Do It and Let the Good Times Roll, the duo made its mark on the music industry. They had been recording music since the 1960s and had created quite a legacy for themselves. The duo received the national honour of Order of Distinction (Officer Class) in 2004 for its contribution to the development of the music industry.