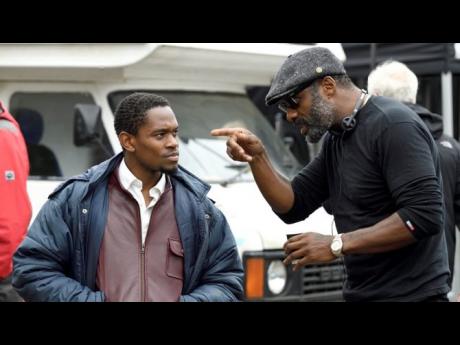 The production of Idris Elba's directorial debut has begun.

The film is based on the 1992 debut novel by Jamaican-born British writer, Victor Headley, which tells the story of a young Jamaican named D, who arrives in London in the early 1980s with a kilo of cocaine.

Yardie, will be shot on location in London and Jamaica over a seven week period.

"I’m honoured to be able to shoot it in my hometown of London and as a guest in Jamaica. It's about a boy who comes from Jamaica and finds himself in London, being a naughty boy," Elba said.

StudioCanal, released a first image on Tuesday (pictured) from the set of the film, which sees Elba directing actor Aml Ameen, known for his work as Alby in Maze Runner and Capheus in the first season of Netflix hit series, Sense8.

"Because it's called Yardie, you might expect it to be a violent film, and to some degree it is, but it's got a human heart and soul. I am interested in making human stories with characters that are either, full of grace or flawed. I'm an actor, so I want good acting in my film," said Elba, who also has a supporting role in the film.

Yardie will introduce Jamaican newcomers Shantol Jackson, Sheldon Shepherd and Everaldo Creary as Jerry Dread. The film is produced by Robin Gutch and Gina Carter for Warp Films. Elba will also serve as an executive producer on the film.

Yardie is co-financed by Studio Canal, the BFI, BBC Films and Screen Yorkshire. Universal Music is also a partner in the film, with its Island Records label set to release the soundtrack.