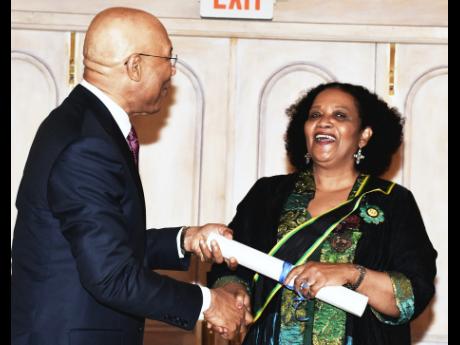 Contributed
Lorna Goodison being invested as Poet Laureate of Jamaica 2017-2020 by Governor General Sir Patrick Allen at a ceremony at King’s House, recently.

Fittingly, since poetry is a blend of the two, words and music imbued the ceremony at King's House on Wednesday when Lorna Goodison, "a superlative poet with a high international reputation", was invested as Jamaica's second nationally appointed Poet Laureate.

The description quoted was given by University of the West Indies Professor Emeritus Edward Baugh, one of Goodison's mentors, as he read the citation, which he, himself, had written and moments later presented to her. Baugh was one of the many VIPs, who, along with family, friends, and well-wishers, filled the glittering ballroom.

The size and enthusiasm of the gathering suggested that the new Poet Laureate's task of "stimulating a greater appreciation for Jamaican poetry" should not be too difficult.

Goodison succeeds Mervyn Morris (another of her mentors, she said), who has been widely praised for his promotion of poetry during his three years in the office.

"Poetry has been my friend, my guide, my comforter, my North Star," a "very excited, very happy" Goodison said in her address towards the end of the two-hour-plus function. The author of either 11 or 12 books of poetry (Baugh gave one figure, Goodison's biography another), of two prize-winning short story collections, and Professor Emerita of the University of Michigan, where she was a professor of English and African and Afro-American Studies, Goodison assured her audience that she would continue to be herself and do what she has been doing.

The phrase indicated that she would continue writing poetry, which she said she had been doing all her adult life, but she added that she wanted "to do more collaboration" with other artists. She also said that she intends to work with young people, a promise that fits in well with the mandate outlined in the evening's printed programme. It states that the Poet Laureate "... is tasked with creating an avenue for public involvement in the spoken arts by stimulating the writing of poetry and improving youth appreciation of poetry".

Goodison ended her address simply: "Poetry is lovely. Thanks."

Many people preceded her at the lectern, all shepherded by the MC for the evening, Fae Ellington. They included the Rt Rev Dr Howard Gregory, Bishop of Jamaica and The Cayman Islands, who said a prayer, and Kellie Magnus, a member of the Poet Laureate committee.

Stating that many mistakenly thought of poetry as elitist, Olivia Grange, minister of culture, gender, entertainment and sport, pointed out that Claude McKay, Bob Marley, and Buju Banton were widely recognised poets of the people. "Our poetry captures the essence of who we are," she said and quoted lines written by the poet and songwriters to prove her point.

After National Librarian and CEO of the National Library of Jamaica Winsome Hudson spoke of the history of Poets Laureate and the breadfruit-leaf- encircled Jamaican insignia, there was a performance by Tribe Sankofa, a performing arts ensemble founded and directed by Fabian Thomas. The text used were excerpts from a Goodison work.

So were the lyrics in songs by soprano Christine MacDonald, which followed. She was accompanied by Stephen Shaw-Naar on piano and Emily Dixon on cello. The latter doubled up as a member of the evening's main musical group, Peter Ashbourne's Pimento String Quartet, which provided several musical items.

Following his address, during which he lamented the fact that many students who study poetry in high school do not sustain their interest after graduating, perhaps because of economic challenges, Governor-General Sir Patrick Allen undertook the sashing and pinning of the Poet Laureate.

The Poet Laureate of Jamaica programme was re-established in 2014 by the combined efforts of the National Library of Jamaica, the Literary Arts SubCommittee of the Entertainment Advisory Board, and the Ministry of Tourism and Entertainment. Jamaica's first two Poets Laureate were selected by the now defunct Poetry League of Jamaica.