Denroy Morgan: ‘Music is a powerful medium – use it!’ 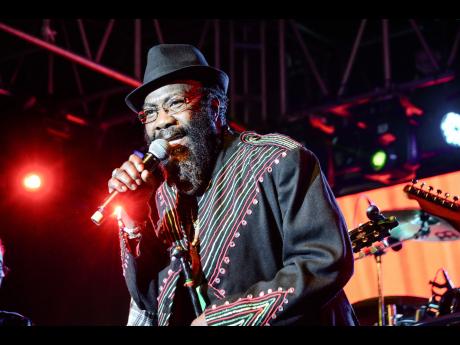 Foundation reggae singer and patriarch of the Morgan Heritage family, Denroy Morgan, is advocating for artistes to use the powerful vehicle that is called music to bring about change.

"Music is a vehicle; it is a very powerful medium to use for positive things," he told The Gleaner.

An ordained minister in the Ethiopian Rastafari Church, Morgan said his musical mission has always been powered by the anointing which has been on his life for many years.

For Morgan, each time he takes the stage is an opportunity to focus on both ministry as well as to entertain.

Morgan recently performed Hallelujah, from his latest album Muzical Unity at the Christ Church in Vineyard Town, and he is still joyous about the experience.

"It was like a treat for me to be invited to the Anglican Church and for me to perform I'll Do Anything For You and Get Up Stand Up (also a cover track on his album) in the church and to have the Father singing One Love with me. We sang it together, and for me to bring my drummers in that setting is something that we have been preparing for but never know when it would get here, but it happened," said Morgan.

Give back to Clarendon

Morgan, who was born in May Pen, Clarendon, and spent his early years there, said the time has come for him to look back on the parish of his birth.

"I intend to do some things there. I am awaiting a talk with my brethren Toots (Hibbert). We are from there and if we could do something meaningful, I would love it," he said, highlighting the fact that many other talents originated from the parish.

He also reminisced on his days growing up there and going to school - an experience he said he won't forget.

"I had to walk from Western Park to May Pen Primary, and I had to make sure I reached early. That walk was long!" he recalled.

The singer, who was in the island promoting Muzical Unity, took the opportunity to weigh in on the ganja issue.

"Ganja must be free, just like the children of Israel must be free. Everyone is now realising that ganja is good. It is not a drug. Rasta has been advocating for its use for sacramental purpose for many years and the legalisation of it, and now the world is recognising that it is for medicine and recreation. It is the safest therapeutic substance that man can intake," is his claim.

Looking ahead, Morgan says he is looking forward to performing with his new band called Black Eagles.

"July 3, I will be performing at the African Arts Festival in Brooklyn. It will be my official return to the stage with the band," he said.