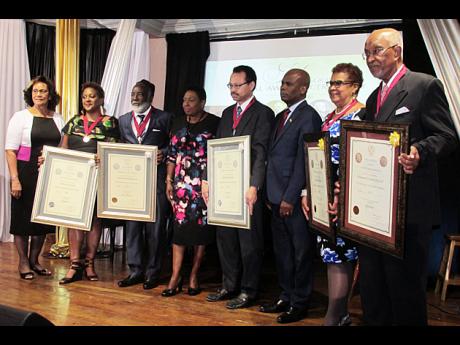 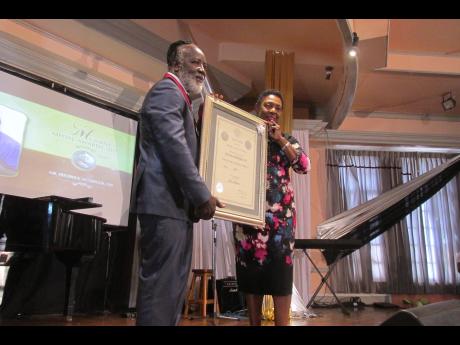 He was not slated to perform, but Frederick 'Freddie' McGregor acquiesced when he was invited onstage by Hugh Douse, artistic director of the Nexus Performing Arts Company, which was singing a medley of his hit songs called Big Ship Suite, and patrons could not get enough.

The occasion was the 2017 Musgrave Medals Award ceremony in the lecture hall of the Institute of Jamaica, located in downtown Kingston, on Thursday.

In responding on behalf of the recipients, Shirley said, inter alia: "As recipients of this year's Musgrave Medals, it is heartwarming to receive validation ... to know that our nation hears the pulse of our efforts. We do not have to question whether our songs, our poems, or scientific discoveries are being made in vain."

In her brief, but well-received presentation, Shirley waxed poetic, eliciting spontaneous applause at several points, which crescendoed into an ovation when she ended with, "On behalf of this year's Musgrave Medal recipients, I say thank you to the Institute of Jamaica for making us feel, even for a moment, like big ships sailing on an ocean."

She was, of course, alluding to McGregor's timeless hit song, Big Ship, which typified the inclusiveness of her speech. McGregor, she said, had promoted the rhythms of Jamaica on the international stage, while the UWI cardiac surgery simulator, which Professor Daniel Coore co-invented, has had a significant impact on the training of surgeons overseas.

The experiences of Jamaicans living and working abroad were told to the world by Ambassador Basil Bryan, and the work of geomorphologist and clean environment advocate Eleanor Jones has been instrumental in promoting Jamaica's interests in negotiations with overseas developers and investors, Shirley said.

She also said that she had never thought that her writing about the everyday experiences of Jamaican people would grant her invitations to read at literary festivals the world over. And all over the world, Professor Ho Ping Kong, "from bucolic Clarendon", is a leading doctor in internal medicine. He was not present at the ceremony, so his medal and certificate were accepted by Custos of Kingston Steadman Fuller.

The significance of the medals was clearly not lost on the recipients as Shirley remarked: "This is a medal that stands on the shoulders of history and signifies the achievements of many of our citizens in a post-colonial nation ... that is not to be taken lightly. I speak on behalf of the recipients when I say that no matter what international recognition we receive, nothing means as much as being recognised by your country ... . This award will motivate us to continue the work of giving back to our nation."

The Musgrave Medals in gold, silver, bronze, and the Musgrave Youth Medal are awarded by the Institute of Jamaica in recognition of notable contributions to literature, science, and art.

The Sunday Gleaner spoke with the recipients after the formalities ended, and "happy", "honoured", "elated" and "great" were some of the words they used to describe how they felt. Eleanor Jones was feeling "absolutely marvellous" and humbled.

Still glowing from the surprise of his impromptu performance, Freddie McGregor said: "I feel great. One of the greatest feelings in a long time. We've got a lot of awards and accolades from abroad, but when it comes to Jamaica, it's a totally different feeling. There is no award in the world I've got that makes me feel the way I do today, and when I received my OD."

Ambassador Basil Bryan shared similar sentiments when he said, "I am very honoured to be recognised by my country for the work that I have done, and it is always wonderful to work on behalf of Jamaica."