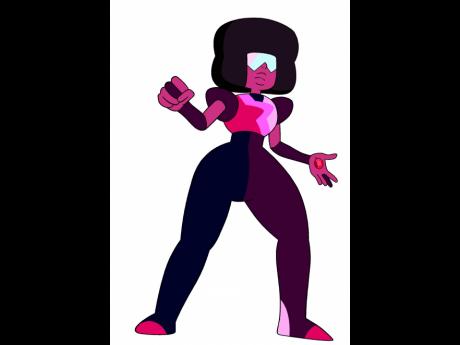 Contributed
Garnet, the character Estelle does the voice for in 'Steven Universe'.

Based on her music output, it may seem Estelle has been out of the recording studio for awhile. However, the singer has spent many hours behind the microphone, using her voice as the vocal talent for Garnet, one of the main characters of Cartoon Network's hit shows Steven Universe.

Estelle told The Gleaner that she was approached for the role by creator of the programme, Rebecca Sugar. Estelle has been surprised, but the number of people that love Garnet, especially "black women".

Garnet was designed around her own character, voice and mannerisms by Sugar while she listened to Estelle's music. The character's self-confidence is shown by it never asking questions.

"Rebecca, the creator, told me that they wrote the character specifically for me. It's an amazing ride," Estelle said. Her ongoing gig as Garnet, a crystal gem alien that has chosen to protect the world from malicious invasion, began in November 2013. Steven Universe has a very active following in the Comic-Con community, has been nominated for Emmy Awards and widely praised for its portrayal of LGBT relationships.

Though her cartoon character is a tough one, Estelle said that she enjoys that the creators have managed to strike a balance between blackness and femininity. "We're often portrayed tough as black women, or as black people, but with Garnet, it's nice to give off a feminine, beautiful side to it. It's great to show that as black people, we have a human side that people don't get to enjoy. Garnet, she gets to be nice and human, and still tough, saving the world from destruction!" Estelle told The Gleaner.