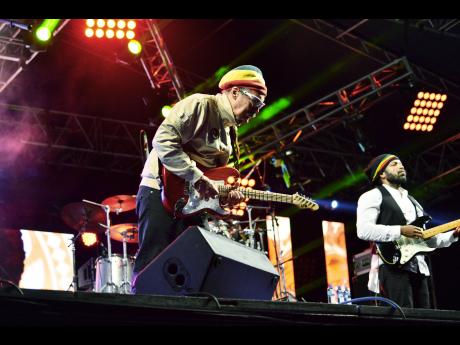 Legendary reggae band, Third World is currently in New York City, as the group is slated to perform later today at the first ever United Nations Oceans Conference.

A group of 12 island nations from the region, will gather in the ‘Big Apple’ for a dinner reception to celebrate their people's historical ties to the marine environment and underscore its importance to their economic future.

At least nine heads of state and ministers are expected to be present at the conference and reception.

The Oceans Conference, which was called for by the Small Island Developing States (SIDS), is a unique opportunity for the world to come together and find solutions to these (environmental) problems before it's too late.

In a statement to The Gleaner, ahead of their performance, Third World said they were honoured to have been given the opportunity to participate in the event, especially as they have been doing similar work promoting a healthy environment through their Alligator Head foundation.

“Third World has a long-standing relationship with the United Nations. We were awarded the United Nations Africa in Crisis Medal of Peace in 1986 and have performed in the UN Assembly Hall on various occasions,” they said. “The Pacific and Caribbean islands have so much in common, we are all nations where the sea is a vital part of our community. We are very honored to be returning to the UN to perform today under the invitation of the Mission of Nauru and representing the Small Developing Pacific Island Nations with support from the Alligator Head Foundation based in Port Antonio, Jamaica. It is so incredible to be here in NYC supporting World Oceans Week. We are very energised to spread the message of how important it is for us to keep our Oceans clean - without the oceans, we have no life. We look at our involvement with the Alligator Head Foundation and the initiative they have put in place to curb plastic pollution at home in Jamaica, as we encourage our fellow Caribbean islanders to 'Think Globally and Act Locally'. It makes a difference that we create this movement together."