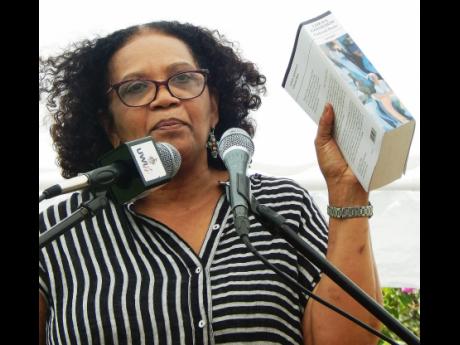 File
Lorna Goodison holds up her recently published collection of her poems at the Talking Trees Literary Fiesta. 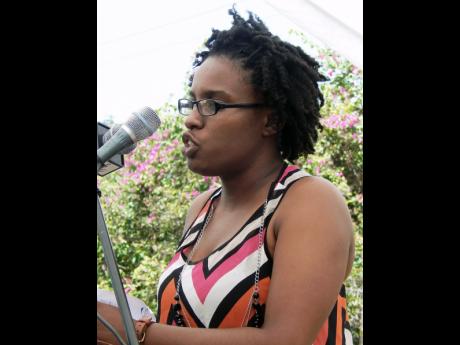 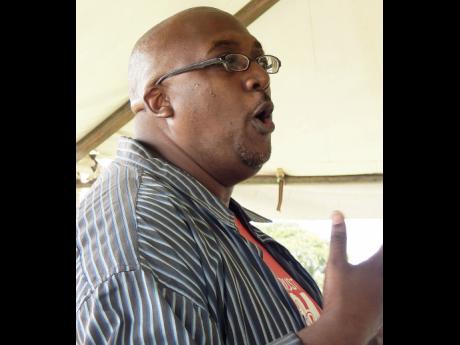 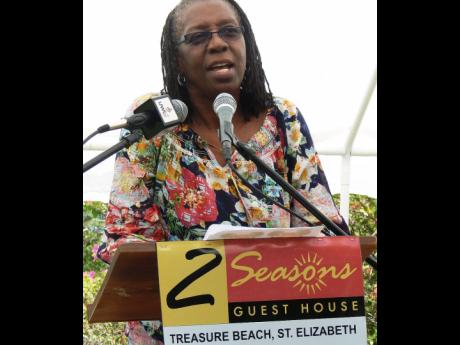 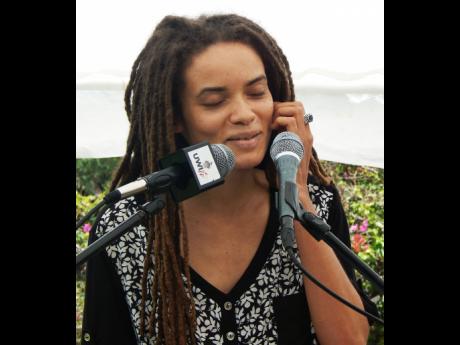 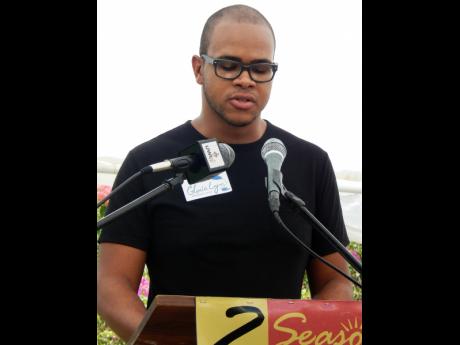 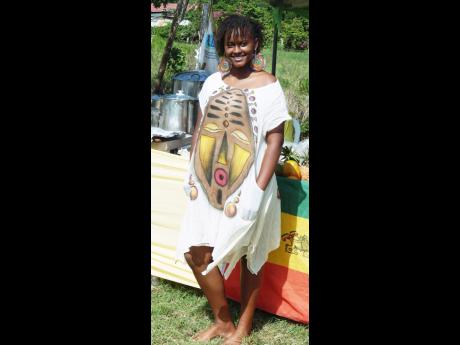 Michael Reckord
One of the fashion wear models at the Talking Trees Literary fiesta. 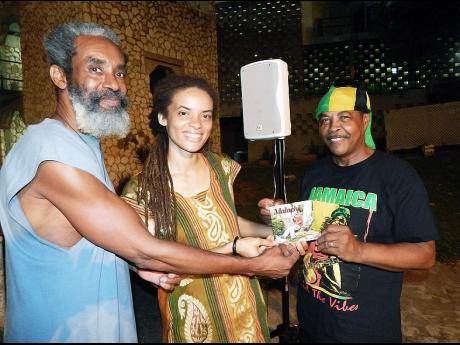 The publicity for this year's 2 Seasons Talking Trees Literary Fiesta, that drew me to Treasure Beach, St Elizabeth, on May 27, indicated it would involve at least two dozen performers in a short play, poetry readings, the launch of a book of poetry, fashion show and playing music in two bands.

Four participants were of special interest: internationally acclaimed poets Lorna Goodison, Olive Senior and Malachi Smith and my poet sister, Margaret Reckord Bernal. As it turned out, I had to leave early and got less than I wanted - though I did get more than I expected.

While I missed Senior and Smith, in addition to hearing Goodison and Reckord Bernal, I heard poems by Yashika Graham, prose by Roland Watson-Grant (reading from his novel Sketcher), and interesting testimonials from present and past University of the West Indies (UWI) students of the Department of Literatures in English about what the Gloria Lyn Memorial Fund scholarships mean to them.

As in 2015, the Department of Literatures in English and the fund collaborated with 2 Seasons Guest House to produce the fiesta. The late Gloria Lyn was a lecturer in the department and the fund established in her name gives annual scholarships to the second-year student with the best grades.

Along with two previous winners, this year's winner, Cornel Bogle, spoke, his main themes being the role of the artist in society and the transformative power of literature. Earlier winners Francina Cousins and Karlene Johnson are now teaching and spearheading interesting extra-curricular projects at their schools. Cousins has set up a creative writing club, while Johnson established a bammy-making factory.

Master of ceremonies Fabian Thomas, writer and director of a 10-minute play, Daddy, that was staged later. Of Goodison, he said, "Her poems are like prayer." At the end of some readings he exclaimed, "Aren't words wonderful?"

His enthusiasm was appropriate, for all the readers transported us to various mental - even spiritual - places of beauty that were more delightful than the natural beauty of the Treasure Beach plain on which the performance tent was pitched. After lunch, there were more words to come - in the open-mic segment. For about half-hour, 10 writers-to-be read their prose or poetry pieces. Many showed evidence of talent waiting to be developed, with perhaps the most powerful telling the story of The Zong Massacre, which was the jettisoning of dozens of captured Africans overboard from The Zong slave ship in December 1781.

Happily, three days after the Talking Trees Fiesta, I was able to hear Smith at the Poetry Society of Jamaica's fellowship at the Edna Manley College. He recited several poems from his most recent album, Malachi Wiseman.

From 2 Season Guest House owner and founder of the fiesta, Christine Marrett, I learnt that the next one will be in 2019, as it is designed to alternate with that other renowned Treasure Beach event, the Calabash Literary Festival.

"In January 2011, after the announcement of the cancellation of Calabash, six property owners in Treasure Beach got together to stage what was called the Treasure Beach Bread Basket Festival. The announcement, of course, had been a big blow to the Treasure Beach community, which had come to rely on the influx of visitors that Calabash brought in at the end of May each year. I understand that farmers would plant crops for reaping in time for Calabash," Marrett said.

"So, with funding provided by the Tourism Enhancement Fund, each property staged a different kind of event on a weekend in May. Two Seasons Guest House put on the 2 Seasons Talking Trees Literary Fiesta. It's similar to Calabash, but different in that we focus on Jamaican talent, which is often international, and we cater to children, with a children's programme running concurrently with the main stage."

This year's fiesta was actually a two-day event, with writing workshops on day two.