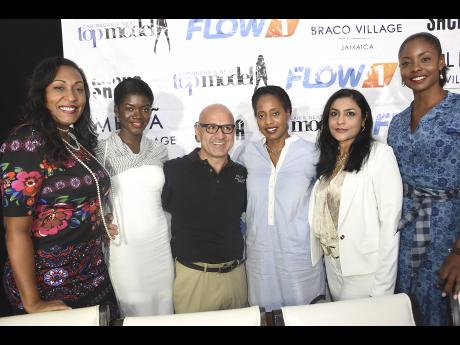 Caribbean's Next Top Model (CaribeNTM) Season four will be shot in Jamaica.

Host and chief judge, Trinidadian Wendy Fitzwilliam, a former Miss Universe, made the announcement at a press conference at the Spanish Court Hotel, Kingston, recently.

CaribeNTM is a Reality TV competition set in the Caribbean, which features a group of aspiring models from across the Caribbean competing for the title of 'Caribbean's Next Top Model' and a chance of an international career in modelling. Based on the original production and format of America's Next Top Model, CaribeNTM is licensed by CBS International. The three previous series were shot in Trinidad, Barbados and Grenada.

Noting that the competition "allows us to celebrate the beauty of our women and our islands", Wendy Fitzwilliam said that "as a regional competition, CaribeNTM is also a destination series. Jamaica sells itself better than most countries in the region and celebrates international icons like Bob Marley, Grace Jones, Usain Bolt. Everybody knows the major attractions like Dunn's River Falls, and CaribeNTM will also place the spotlight on some of the lesser known sites in addition to developing young talent and honouring our music and culture too", she explained.

Dimitris Kosvogiannis, general manager of Melia Braco Village, the show's hotel partner, said, "Jamaica is born ready for this competition which will give the world a view to our unique hotel, the beautiful and diverse destination." The competition, he said, would complement Jamaica's overseas promotion, particularly in luxury markets.

According to Kim Lee, head of retail and TV marketing sponsorships at Flow, "for all the people who feel they know Jamaica, CaribeNTM gives a 360 degree approach that we are confident will be very impressive." She said that "the highly anticipated series" will again be broadcast on Flow 1 and that her company, which has provided considerable sponsorship in the sporting sector, was "happy to provide similar support for the lifestyle sector".

Joining Wendy Fitzwilliam as judges for CaribeNTM Season four will be her fellow resident judges, Socrates McKinney and Pedro Virgil. Other guest judges and photographers will lend support throughout the season.

This year, Starfish Media, producers of CaribeNTM, will also present the inaugural FACES Black Tie Gala. The company's president, Dionyse Fitzwilliam, said that "Starfish Media is focused on building and optimising FACES (Fashion, Art, Culture, Entertainment and Sport) at the gala on June 27, 2017, at the Spanish Court Hotel."

The kick-off for the Gala will be a fashion show, followed by a night of dinner, networking and dancing.