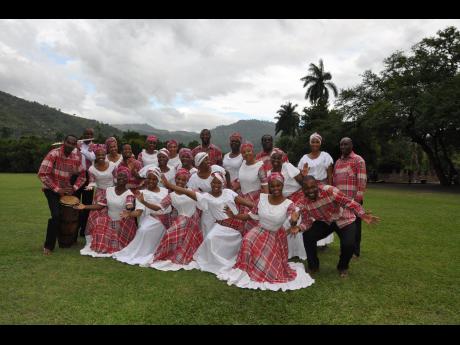 The Jamaican Folk Singers starts its most recent installation of its Uplift Jamaica all island tour this weekend - June 24 and 25 - with performances in Kingston. T tour involves the group touring Jamaica giving free concerts and other performances in town squares, markets and church halls, the aim being to share the richness, variety and significance of Jamaica's musical heritage with people from all walks of life.

The Jamaican Folk Singers, a non-profit singing groupfounded in 1967 by Dr. Olive Lewin, is celebrating its 50th Anniversary this year.The main objectives of the Jamaican Folk Singers include: unearthing and exposing the artistic worth of Jamaica's musical heritage; keeping alive the folk foundations of Jamaica's music with music, movement and mime presentations that are artistically acceptable, All this is while retaining the integrity of the source and maintaining active contact with the keepers of our culture.

Tomorrow, the group will be performing in downtown Kingston in front of the Ward Theatre and surrounding areas from 10 a.m. to 12:00 p, m. There is a special performance at Mother's, North Parade at 1nn:15 p.m.. On Sunday, June 25, the group will present a full length concert at Meadowbrook United Church, 2 Flemington Drive, Kingston 19 at 4 p.m.

All are invited to share with the group as the Jamaican Folk Singers dedicates its 50th Anniversary year to giving back to Jamaica and its people.