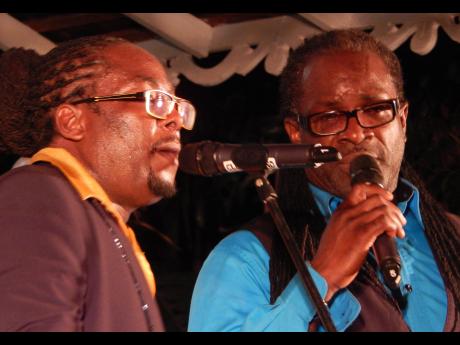 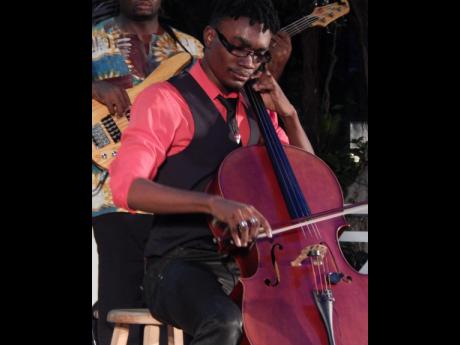 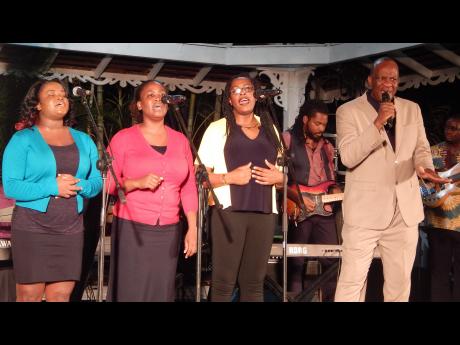 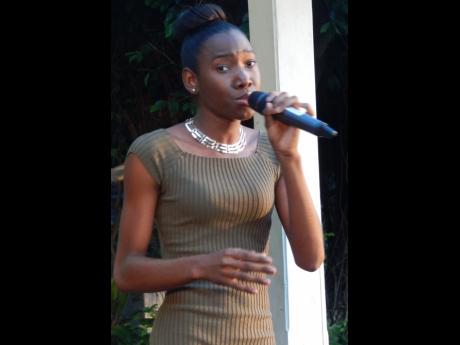 Michael Reckord
Susanne McGregor, who studied music education in college, showed she also learnt to be a performer. 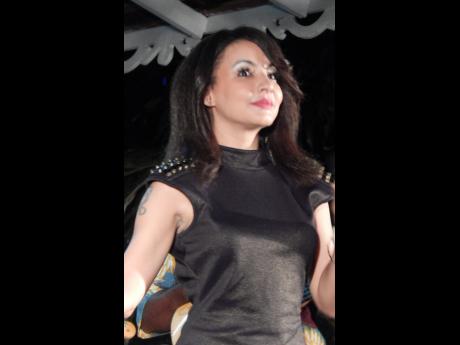 Michael Reckord
Like her audience, singer Dje had a good time at the concert.
1
2
3
4
5

For 17 years, on the last Sunday of alternate months, the main lawn of The Jamaica Pegasus was the venue of concerts called Jazz in the Gardens. Then, in February, producers Nancy McLean and Cathy Nunez renamed the show Jazz 'n Cabaret in the Gardens, to reflect the fact that the series really offered patrons a mix of music, not just jazz.

Sunday's concert offered not just a musical mix, but a mix of musicians. Titled 'The Professionals', it featured at least three performers who were not primarily professional entertainers - medical doctors Michael Abrahams and Kathy Brown, and attorney-at-law Hugo Barrington.

And there might have been others, as the workaday attire of several of the performers suggested that they had gone on stage directly from an office. Audiences expect entertainers to dress with a little pizzazz. Most dancehall artistes know this.

After a few pleasant jazzy numbers by the backing band, Pon Fyah, led by keyboardist Osoune, the other performers came on in, broadly speaking, an ascending order of their capacity to generate excitement. Thus the first two acts were less exciting than the last two.

Not that the former lacked talent. The first singer, Susanne McGregor, a music education graduate of the Edna Manley College School of Music (according to the informative emcee Michael Anthony Cuffe), showed she could have successfully pursued the performance programme. Her songs included Let's Stay Together, My Funny Valentine and a couple of rock steady numbers.

Eighteen-year-old Kadeem Leslie, an excellent classical cellist, apparently decided he would experiment with the cello as a jazz instrument. Perhaps in other hands it could work, but on Sunday night it left a lot to be desired. His tunes were Coconut Woman, Sly Mongoose, Love is a Wild Bird (from Georges Bizet's opera Carmen) and The Pink Panther theme.

Continuing the evening's theme of performers moving in unexpected directions, Cuffe introduced the next artiste, Dje, as a woman who was interested in developing young female singers. If she can pass on to her students her ability to (apparently) believe in the words of her songs, she would have put them on the road to success. She was quite convincing as she sang Don't Know Why I Didn't Come, Come Away With Me in the Night and Brown Skin.

Even more passionate about the message he was giving the audience was Dr Abrahams, who was quoted by Cuffe as saying, "I don't want to be seen as a comedian per se." Of course, the doctor's poems and remarks about the horror of child molestation, the difficulty of raising children and the need for good role models came across as important to the society. Fortunately, Abrahams is able to simultaneously be entertaining and thought-provoking.

The other physician for the evening, Dr Brown, was equally entertaining as she took the audience back to jazz with her keyboard. Opening with a jazz standard, Night and Day, she went on to play her version of Chick Corea's Got a Match, Earth, Wind and Fire's Fantasy, and then her own bouncy Latin Groove.

Attorney-at-Law Barrington warned the audience that his voice was not in its best condition and, in fact, his set turned out to be just so-so. He sang I Can't Help Falling in Love With You, I Wanna Get Next to You and I've Got a Feeling It's Over.

The two acts after the intermission were the gospel group Urim 7 (a band and several singers) and Dwight Richards and Friends. With Richards, a vocalist and trumpeter, came his backing trio (Othneil Lewis on keyboard, Christopher Tyrell on drums and Paul Madden on bass) and his friends, vocalist Althea Hewitt and singer-trombonist Everton Pessoa.

Both groups were superbly entertaining, delivering between them about two dozen songs and medleys. Almost the entire audience was dancing and clapping as the concert ended with Richards and Friends singing and playing a medley of, If I had the Wings of a Dove, Wash Wash, What a Hard Man fi Dead, My Boy Lollipop, Simmer Down and other tunes.