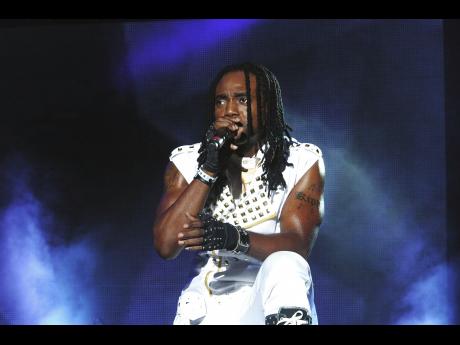 File
KipRich performing at a previous staging of Reggae Sumfest.

Local dancehall artistes usually measure the vitality of their performance and lyrical alacrity through clashing. In December 2012, Marlon Plunkett, better known as KipRich, made headlines after winning a clash against the notoriously agile in battle Ninja Man.

But at the beginning of his career, before the Telephone Ting artiste entered the realm of seasoned wordsmiths, the artiste caught his practice as an early performer on the Reggae Sumfest stage. According to the deejay, Reggae Sumfest is an event that invites the attention of international players in the music industry– a perk for up-and-coming artistes.

“My first, first time on that show, I got a 10-minute performance – three quick songs. I couldn’t even finish my song good, and it was early, too. But I guess that’s where my thing was at the time,” he said. Since snagging his first slot on the 25-year-old music festival, KipRich has since been billed to perform on the Reggae Sumfest stage for nine other stagings. Though not billed to perform this year, the Jook Gyal artiste hails the concert as a good platform to showcase talent to the world.

“You have promoters from all over the world who tend to come to shows like those to see if they can book you for shows in their areas. Tourists also come in, and they might know your voice, but may not know the face or who might not know you at all. But that night, they leave knowing you,” Kiprich told The Sunday Gleaner.

Being a billed act on the music festival also guarantees local artistes the opportunity to interact with their international performing peers, but for KipRich, the important interaction happens between the act on stage and the international media and booking agents who visit the island to take in the show.

“I would say it do a lot for me promotion-wise. There’s international press there, so them get interviews with you and you can use that for promotion,” he said. “It’s a good platform to go out there and showcase your performance – how well you can go and do on a big stage. If is even me going be the first act, when the man dem a put out the corn, mi feel good same way because I would always see [Reggae Sumfest] on TV and the reviews,” KipRich added.

For those international artistes who seem unreachable, KipRich said: “Backstage, everybody jus deh deh. You introduce yourself, yuh ah rub shoulder. It don’t look like nothing. It becomes the norm. I remember when Chris Brown and Usher come ... . We up and down. We up and down just like with a local act, a run joke and laugh. It’s a nice vibe, but it’s nothing out of the ordinary.”

KipRich’s dancehall career has become known for humorous elements in his music, not a major deviation from his mentor, Elephant Man, known for his exuberant style and energy. But it was on the Sumfest stage that the artiste was allowed to flex his stage-planning skills to accommodate guest performers in his set. The success of some antics has become the artiste’s most memorable experiences at the music festival.

Though recalling the exact year was difficult, KipRich relayed when his hit song, Telephone Ting, was making waves, and he brought out a singer to open his performance.

“She do her likkle ting, mi come out, and mi get a big forward. Mi always remember dah likkle stunt deh. Mi try it, and it work,” KipRich said.

On another occasion, he fondly recalls bringing an audience member on stage during his performance. “A big fluffy lady, like a 600[-pound lady. Mi sing to her, seduce her. She did start pull mi shirt, and the scream wey mi hear inna Sumfest couldn’t compare to nothing at all,” he said.