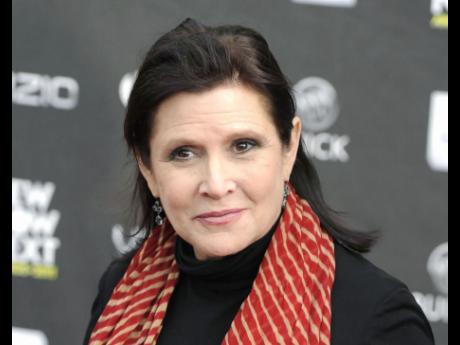 Billie Lourd thanked Disney for making her late mother, Carrie Fisher, a Disney Legend as she celebrated her own birthday on Sunday.

The Scream Queens star celebrated her 25th birthday with a rainbow-themed party which included a water slide and a photo booth, and the actress used the occasion to post a tribute to Carrie who tragically passed away aged 60 in December 2016.

On Friday, Carrie became a posthumous recipient of the Disney Legends Award with Disney chairman Bob Iger remembering the actress and her love of the company at the D23 Expo in California.

Billie shared a sweet throwback photo of her, Carrie and her late grandmother, Debbie Reynolds, meeting Mickey and Minnie Mouse at Disneyland on her Instagram account and captioned it: "My mom and I went to Disneyland so much that I now realize she may have loved it even more than I did. Thank you so much to @disney for making my mom the ultimate Disney combo: a princess and now a legend (sic)"

The actress invited Teen Wolf star Colton Haynes to her bash and he posted a picture on the photo sharing site.

Carrie - who shot to fame as Princess Leia in the original Star Wars trilogy - had just finished filming the eighth instalment of the franchise The Last Jedi before passing away.

Star Wars star Mark Hamill was also named a Disney Legend for his performances as Luke Skywalker in the sci-fi saga - the rights of which Disney acquired after buying Lucasfilm in 2012 - also paid tribute to his late co-star at Disney's D23 Expo in Anaheim, California, and said he can see "so much of Carrie" in Billie.

He said: "I see so much of Carrie in her that it's just satisfying in a way. I think, for everyone involved in the movie and the public as well, to see the legacy passed down from a generation. I think the film (The Last Jedi) has an air of melancholy about it, which it doesn't deserve, but that's life isn't it?"

Carrie was the daughter of the Singin' in the Rain star Debbie Reynolds, who also tragically passed away the day after her daughter.

Princess Leia is not yet an official Disney Princess like Snow White and Ariel but fans have been clamouring for the intergalactic character to be granted that special status, even starting a petition.