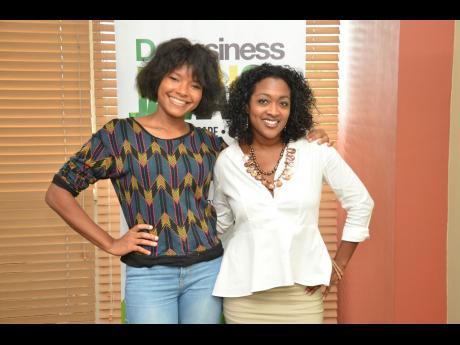 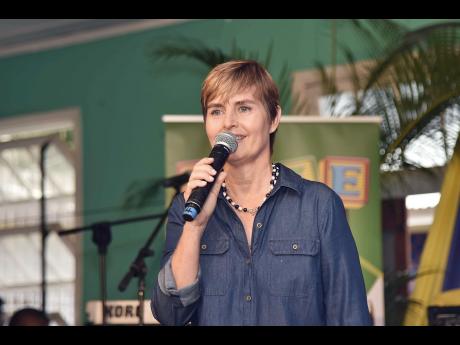 Contributed
Justine Henzell, daughter of the late Perry Henzell, creator of 'The Harder They Come', addresses the audience. 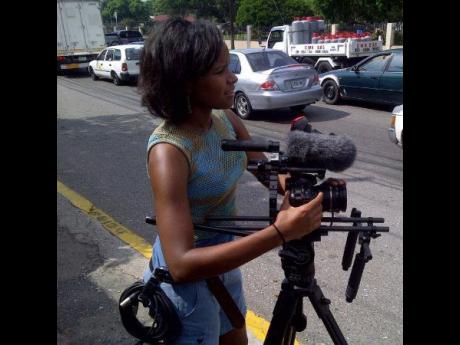 These days, the tone has shifted with young film-makers advocating that it is not merely an appetite for foreign product that is starving local content. Instead, the 'foreign appetite' remains open, perpetuated by an absence of investment.

Some local agencies recently banded to support PROPELLA, an annual initiative developed by the Jamaica Film and Television Association (JAFTA) in partnership with JAMPRO, which rewards five film-makers with just enough to fund a short production.

For the ones who function outside that initiative, their progress is propelled by 'begging favours'.

On August 2, a pair of millennial film-makers will premiere Unbound at The Liguanea Club in Kingston. The 30-minute film was funded primarily out of pocket.

Dawkins shares credits of being writer and director for the project with David Johnson.

"Cast and crew gave their time. Food was a huge bill, as well as fight training we ended up paying for," she said.

Another dent in the pocket came from booking venue space for the film's premiere.

"You can imagine what a feature length would take. People would have to take time off from their job and we'd have to pay them, feed them, travel to and from set and all this does not include paying ourselves," she said.

Michelle Serieux, director of the 2016 PROPELLA, who supported the short film, Sugar, maintained that while the budgetary support provided by the initiative was significant, many aspects of production were funded out of pocket, with cast and crew receiving meagre stipends for time spent.

"We're really grateful for the contribution because, of course, it stimulated production; we wouldn't have otherwise had the cash," she told The Gleaner. Five film-makers were each granted $500,000 from the initiative.

In the post production of Sugar, Serieux and the film's writer, Sharon Leach, cushioned additional costs for the film's marketing and promotion. In order to get the film screened internationally, Sugar had to be converted into a digital cinema package (DCP), a collection of digital files that store and convey digital cinema (DC) audio, image, and data streams.

"We got DCP - that was at mine and Sharon's expense, and doing that is not cheap. It had to be converted so that it could be shown on the international stage, because some platforms require certain formats, and there were other costs.

"Short film-making is a craft in itself. Maybe it will inspire confidence doing it in that format. It's a great move to master short-form storytelling competently before moving on to feature-length productions," Serieux told The Gleaner.

One millennial production managed to make television. Teeqs made her directorial debut earlier this month on TVJ with the premiere of the (very) mini-series, Losing Patience. Similar to the previously mentioned film-makers, this young director funded the production out of pocket while 'begging favours'.

Teeqs began her film career interning for various companies, "which are really just individuals who function in the film industry, and now I've landed a position where I can partner with those people I've worked with to create the show".

"[She] put up some money and the rest was calling in favours. Thankfully, people were interested. I think that's because it's artists' content, not a commercial or a music video. People in the [film] industry crave the opportunity to tell a story," the director said.

Along with the experienced support of Henzell, Teeqs also 'begged' the support of rising reggae crooner Sevana and up-and-coming starlet Kimberly Patterson.