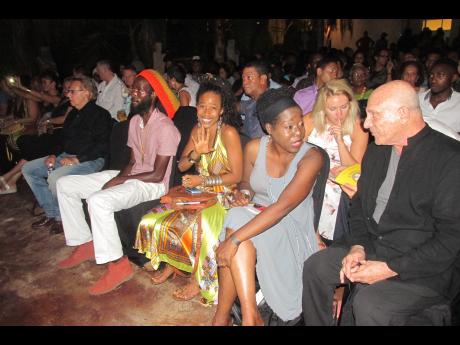 Paul H. Williams
A section of the audience that turned out to see Rasta: A Souls Journey. From right are writer-director Stuart Samuels, executive producer Patricia Scarlett, and Donisha Prendergast, the lead character in the film. 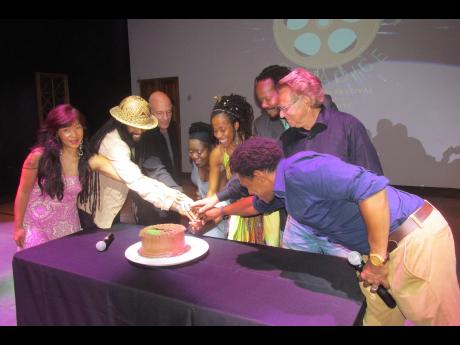 Paul H. Williams
Organisers of Cinema Paradise and stakeholders of Rasta: A Souls Journey getting ready to cut the Marcus Garvey birthday cake. 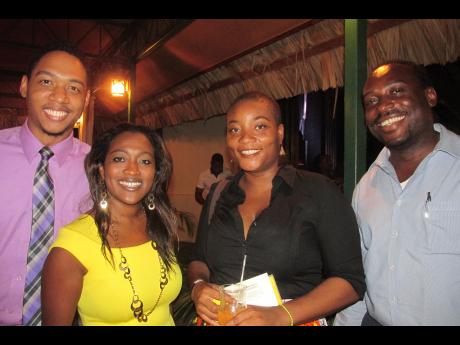 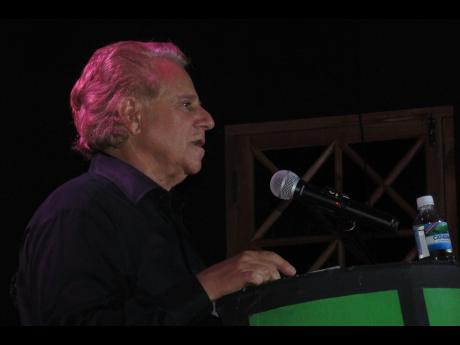 In Rasta: A Soul's Journey, Donisha Prendergast travels around the world to find out what it means to be Rastafari, to come to terms with her own identity as a Rastawoman. Some of the things she found brought her to tears, exposing her vulnerability juxtaposed against her passion, strength and activism.

It is a film about her story, her family story, the story of her grandparents - Rita and Robert Nestor Marley - the story of Emperor Haile Selassie I, the story of Marcus Mosiah Garvey and Lenard Howell, the first Rasta, and, by extension, the story of a set of people who created their own identity and space the world over in which they can freely express themselves, despite persecution and institutional opposition.

After several years in the making, Prendergast finally got the chance on Friday, inside the Serengeti at Hope Zoo in St Andrew, to share her story with the public, and it was a full house that watched her weaving through her odyssey across the world in search of the meaning of Rastafari. It was the opening night of Cinema Paradise Portie Film Festival, a project of Portland's Great Huts Resort Paradise on the Edge, located at Boston Bay in Portland.

In addressing an audience that consisted of people from various strata of the Jamaican society, Dr Paul Rhodes, owner and designer of Great Huts and founder of Cinema Paradise, said, inter alia, "It is propitious indeed that this film festival's opening night ... coincides on the very day of the 130th anniversary of the birth of the great, Honourable Marcus Mosiah Garvey."

Dr Rhodes went on to look at the role, the meaning, and the image of black people in films over the years. In remarking about the content of black films and how they have evolved, he said the black film-maker should not confine himself or herself "to the creation of black art or cinema primarily for black audiences, but must be free to express the full range of his or her humanity.

"However," Dr Rhodes said, "it is important that persons of colour tell their stories, and that such creators do so in ways which

are authentic, powerful, and redemptive." He also said, "While Cinema Paradise is in fact not a black consciousness film festival, I would be dishonest to not reveal my passion for films which explore and reflect ethnicity and individuality and the human condition."

JAMPRO's film commissioner, Renee Robinson, in her opening remarks, said, "Cinema Paradise is a unique showcasing of Afrocentric creative work" in a "space to highlight the social, political and economic elements of these important culture record.

"Cinema Paradise represents a hub where cultural education, creative practice, roots heritage, and ecotourism can be celebrated unlike anywhere else on the island. As film commissioner, it is encouraging and fulfilling to see niche festivals grow and develop ... . I encourage Jamaica's private sector and wealth leaders in supporting this film festival to its full promise," Robinson said.

After the screening Prendergast, executive producer Patricia Scarlett, writer-director Stuart Samuels spoke about the film before fielding questions and comments from the audience. Scarlett said the making of the film was her "own journey" and much of her life has been put into it. Travelling the world and seeing how the Rastafari movement, started in Jamaica, has influenced people not connected to Jamaica has been one the motivations for wanting to produce the film.

Prendergast described the film as a "personal, spiritual, intimate piece" of herself, while Samuels, who regards himself as a white Jew, said prior to being approached by Scarlet to be involved with the project, he knew nothing about Rastafari, but he wanted to understand it and share his knowledge with others.

The cutting of a Marcus Garvey birthday cake culminated the evening in which other delectable meals, prepared by Cafe Africa, were served.