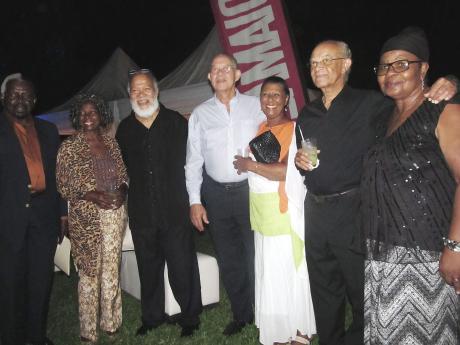 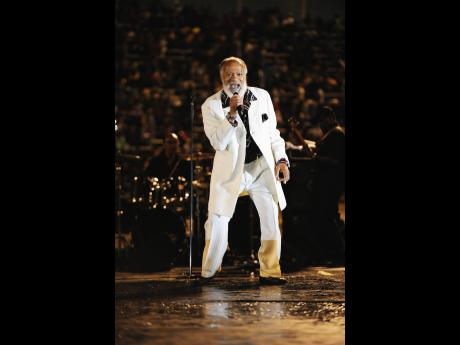 Ernie Smith, as part of his continued celebrations of his 50th anniversary in music, recently paid an official visit to Governor General, The Most Honourable Sir Patrick Allen and Lady Allen.

He was accompanied by his wife and manager, Janet Smith, Mickey Bennett, one of Jamaica's foremost record producers who recently produced Smith's new EP, and Burchell Whiteman, former Jamaican ambassador and former minister of education, who was also Ernie and Janet's English and literature teacher.

Ernie Smith used the opportunity to update Sir Patrick Allen on the plans for the upcoming gala concert planned for September 29, which will culminate the celebratory activities. Smith also presented Sir Patrick Allen with a copy of his new EP.

Following the King's House visit, Smith left the island with the Jamaican delegation for Carifesta, taking place from August 17-27. He was selected as one of the key ambassadors to highlight Brand Jamaica at this event by representing Jamaican Foundation music.

"When we return to Jamaica, we will kick into high gear with the plans for the gala concert," said Janet Smith, the executive producer of the event.

"We have named the concert Pure Gold," said Janet, "as not only does gold signify the 50th anniversary, but it also represents the quality that Ernie has strived for on his musical journey. We intend to give our audience an unforgettable experience to pay tribute to the love and support that Ernie's fans, family, and friends have bestowed on him over the last 50 years. Ernie and I are truly grateful and excited for this opportunity to do this".

Pure Gold, was officially launched at the Jamaica Pegasus hotel on August 10 and will feature an impressive line-up, including Pluto Shervington, Ken Booth, Carlene Davis, Naomi Cowan, Junior Tucker, Ras I, Wayne Armond, Lymie Murray, Winsome Benjamine, Susanne Couch, Charmaine Limonius, Capleton, Dizzy Minott, Dean Frazer, Peter Ashbourne, Boy Band 8, and the Sodianne Brown Dancers. Each artiste will pay special tribute by performing songs from Ernie's catalogue in their own style. An extra special treat will be the performances by Ernie's children Ojay and Sahara Smith, and, of course, several appearances by the legend himself.

As a giveback from this event, Ernie will be initiating a charitable contribution that will be given to the Jamaica Association of Vintage Artistes and Affiliates (JAVAA). The funds will be used to cover the insurance costs for five vintage artistes who have fallen on hard times and who have been selected by Ernie to receive this benefit. The insurance will ensure that these artistes can be buried with dignity in the event of their passing. This contribution will be revolving and so will be able to assist many artistes over the years.