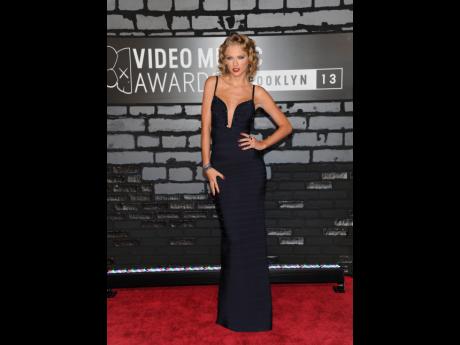 Yes, Taylor Swift fans, Wednesday was a lucky one for you.

The pop star, who whipped her army of Swifties into a frenzy with video snippets of slithery snake parts on social media, posted the title of her new album, Reputation, and announced online, that would be out November 10.

The first single, she said in a series of posts, will drop on Thursday night. And she threw in the album's cover art for good measure: a black-and-white photo of herself head and shoulders, in slouchy sweater, hair swept back against a backdrop of newsprint reading, simply, 'Taylor Swift' over and over again.

Swift, who is followed by millions on Twitter, Instagram, and Facebook, wiped her feeds clean on Friday and replaced the black void on Monday with the first of three reptilian videos, each offering just a tad more of a snake, from tail to squirmy middle, and finally, its beady red eyes and ominous fangs lunging briefly at the camera.

The teasers put fans on high alert, and the snake imagery evoked snake emojis used against her in various dis-fests last year, including one with Kim Kardashian West after West claimed that Swift knew about hubby Kanye's reference to Swift in his song Famous.

The album would be Swift's sixth studio effort and the first since the 2014 release of 1989, which is the last time she teased fans online, that round with mysterious Polaroid photographs.