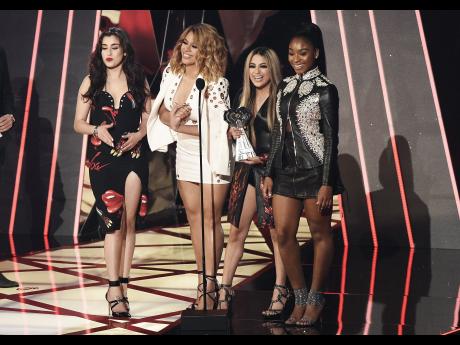 Fifth Harmony say they are the "most harmonious" they have ever been.

The Work From Home hitmakers - which includes Ally Brooke, Normani Kordei, Dinah Jane and Lauren Jauregui - lost their fifth member Camila Cabellom when she went solo back in December. But they insist they are stronger than ever.

Dinah said: "The album is more edgy and mature, of course, but the most harmonious we've ever been."

And Normani added: "Honestly, it's a breath of fresh air. We're just so grateful and we thank God, like, literally every single day. Even in those times where the storm was really, really heavy and we didn't know if it was going to end ... now I recognise what goodness actually feels like."

When Camila left the group, the girls sought advice from Destiny's Child singer Kelly Rowland, who advised them to "let the music speak for itself".

Dinah shared: "We were advised by the Kelly Rowland. She just told us to, like, let the music speak for itself ... and just know your worth, believe in yourself and just be there for each other. So we've definitely honed into that. And for her to advise that, like, that says a lot because, you know, she's gone through the same things."

Normani chimed in: "And she said that she was really proud of us."

The Worth It hitmakers feel they made the right decision in not adding any more members to the group following Camila's departure.

Lauren recalled to Access Hollywood: "We kept referencing that while we were in the moments of that whole thing happening ... Like people, teams or whatever, suggesting, 'Oh maybe we get a fifth member?' Like no, dude. If we're going to do this, it's the four of us. Period."