Story of the Song | Ernie Smith imagines a 'Duppy Gunman' 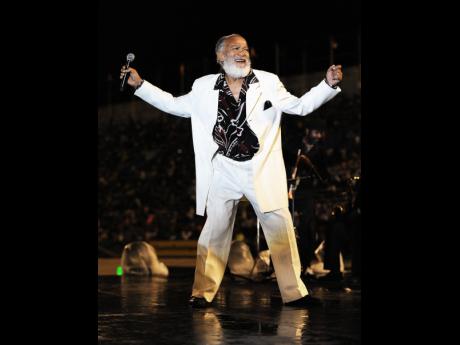 If ever there was a case of a songwriter starting a song with the opposite of the real life situation which inspired it, it is Ernie Smith and Duppy Gunman.

Written one Saturday night in 1974, recorded the following Monday at Federal Studios, released that same mid-week and soaring to the top of the charts ("in those days everything I did went to number one except Power and The Glory. Michael banned that," Smith told The Sunday Gleaner), Duppy Gunman tells the tale of a romantic liaison that could have been. It opens:

I an I man forward

I an I man collie weed

I an I man queen

Getting in the groove

We jus' a come dung to movement

When someone sey don't move

However, while there was a 'queen', there was no getting down to movements.

"I just played a gig. In those days I had a friend who used to help me lift the equipment. Coming home from the gig, I got a girl to go home with. I dropped him home. Me and the girl going on a liaison. I got the feeling like my friend is sitting there," Smith said.

The friend had been in the back of the VW van he was driving.

"I said, 'It feels like Robbie is still sitting there.' I said, 'It must be a dupppy.' Then I thought about the violence and I said, 'or a gunman'. I said, 'It is a song'," a laughing Ernie Smith told The Sunday Gleaner.

"It mus be a duppy or a gunman

I man no fin' out yet

I an I did so frighten

All de daughter name I feget"

"I never bothered to go home with the girl. I went to my real home and wrote the song. She was very upset," he said.

There is some similarity to that real life anger in the fictional musical tale, as Smith sings, "the nex' day de daughter ask me, what happen to yu las' night, jus' when yu ready fi work de show, yu ketch stage fright".

And one line that was definitely taken from something that really happened was when Smith sings, "One ting me know fe certain, spread it round the town, it no mek no sense yu run before yu foot touch the ground".

"There was a guy who described sitting in his living room and watching a thief in his pear tree. All he said was 'hi sah' and the man started running in mid-air. When the man hit the ground his feet were like a car burning rubber. That is where that line came from," Smith said. He was told that story a couple weeks before the song was written.

Sometimes Smith changes the name of the speedster recorded as the point of reference from flatness of foot in 1974 ("Quarrie was a bway to I man las' night, him coulden falla me") to Asafa Powell and he says no other outstanding Jamaican sprinters have been used in between. And on occasions he adjusts the chorus and sings "I an I did so frighten all me underwear I feget".

"Sometimes I sing it like that if there are not too many children around," he said.

The distinctive trombone featured on Duppy Gunman, is the work of Trinidadian Jerome Francique and the Now Generation Band supplied the music.

And a song that was "an instant hit" has been a lasting one as well. "These days when I do that song anywhere I ask the audience to join in and sing the chorus. They know every word," Ernie Smith said.