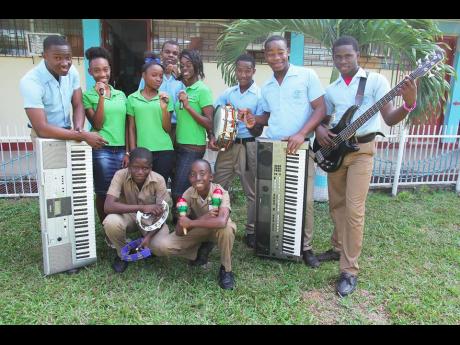 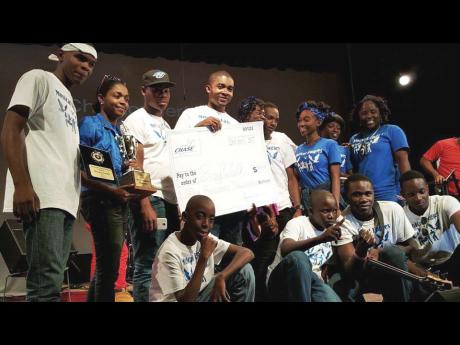 Contributed
The winners of the 2017 Jamaica’s Best School Band competition, Bog Walk High School, are elated as they collect their prize from representatives of Chase Fund, who sponsored the event. 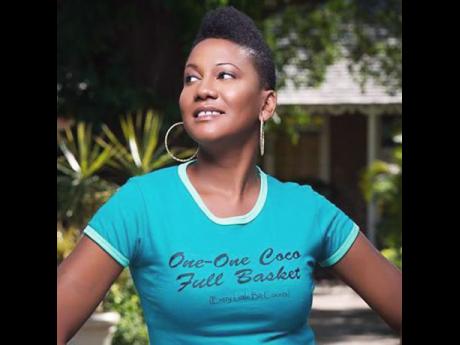 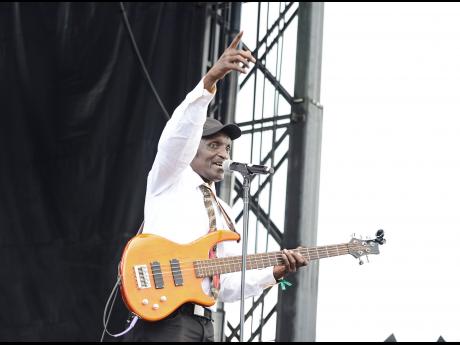 The competition will have four rounds islandwide and various workshops beginning in the first round, with bands from at least 16 high schools.

It is compulsory for all bands to compose an original song (both lyrics and melody) at the semi-finals.

"We find that students may not be exposed to a music programme in their schools, thus there is little chance of their music skills being developed. The Jamaica's Best School Band competition is another platform to exploit the skills of Jamaica's youth, to carry on the rich cultural legacy by nurturing, mentoring and awarding their efforts," said Adriene 'Rayven Amani' Higgins, creative producer of JBSB and managing director at Jorja Events Media.

The workshops will comprise sessions with organisations like the Jamaica Association of Composers, Authors and Publishers and the Jamaica Intellectual Property Office, to make the competition an educational platform, and also teach the younger generation of musicians about intellectual property.

"We are even more satisfied with the feedback received in the five years of hosting the competition, when we hear that students who participated have continued their journey in studying the arts, especially music," said Rayven Amani.

Several band members from previous seasons, in particular Dinthill Technical High School (third-place winners for two seasons) have pursued degrees in music at the Edna Manley College of the Visual and Performing Arts and moved on to work alongside musicians.

"The competition is an eye-opener for many, and I believe that music, being a major part of Jamaica's culture, should also be a compulsory subject," said Lloyd Parkes, OD, vocalist and bass player of The Techniques.

"Even now, the competition is observing schools being inspired to form bands, having seen other schools' accomplishments and wanting to challenge them," he continued.

Parkes has acted as one of the JBSB judges for four years and is joined by other music professionals, including founding member of Third World Band, Ibo Cooper, OD, and Fab Five bass player, Frankie Campbell, OD.

"Some school band members have shared that as part of a disciplinary action, they have been advised to take up music (as an extra-curricular activity) and it has helped with their improvement," said Parkes.

The top performers will have the opportunity to appear on shows like Tarrus Riley and Friends, Rebel Salute, and Ocho Rios International Jazz Festival, to name a few, in addition to the usual cash prizes and instruments.

The top three selected bands will record their original songs.