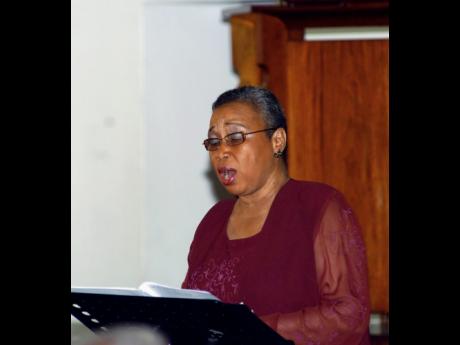 Celebrating 50 years in any form is a significant achievement. So it is for The Jamaican Folk Singers, who are celebrating their 50th anniversary this year.

The group was founded in 1967 by Dr Olive Lewin. There were eight members, all friends. Among those early members were Marilyn Brice-MacDonald and Hazel Ramsay-McClune.

On Sunday at the final show of The Folk Singers concert at the Little Theatre, both women shared with The Gleaner some high points of the journey, as well as the changes they have seen over the years.

As the longest-serving member, Brice-MacDonald has been with the company for 49 years. She described the journey as wonderful and recalled that "It was new to us."

"When most of us started, we knew maybe six Jamaican folk songs. So when we heard all these things, we were shocked to know the words and the stories that the songs told. It is in reflection that you realise it has been a wonderful experience," she added.

Ramsay-McClune, now in her 47th year, said she started out as a secretary for Dr Lewin. When drafted to go on the field trips, she was smitten by the richness of the history and geography that were unearthed. And so, witnessing the discovery of the various forms was exciting.

She remembered fondly when they found a group of Naggos (a Nigerian tribe) living in a place called Abeokuta, Westmoreland. The natives told them that Abeokuta means a place under the rock. Years later, they met a Nigerian professor from Abeokuta, Nigeria, and he gave the same definition as the Jamaicans.

Another high point is the extensive travelling and the many awards The Jamaican Folk Singers have won - a standout being when they won at a folk festival in Argentina.

"There were 62 countries; we were the only English-speaking one. We did not know this. And we did not know it was a competition until they announced us as the winner," Brice-MacDonald related, laughing at the memory of the experience.

But time brings changes, and the Folk Singers are not immune. The changes are both positive and negative. The positive is the number of costume changes that are required for a show. That was not the case in the early years.

"It was probably just one set of costumes - the old-time bandanna, and you just put on an apron to do something else. And with the addition of Kumina you had the Kumina wrap," said Ramsay-McClune, who was once the costume mistress.

There is also a lot more movements in the shows. But for those who were guided by the words of Dr Lewin, "Rehearse till you can't get it wrong," The lack of commitment to rehearsals is of concern.

"This group is like a family, so everything you have in a family you are going to have, and that means a little change. The world has changed; life has got more difficult," Brice-MacDonald admitted.

But with the current musical director, Christine MacDonald Nevers, being "just like Olive", the music has never changed, all the songs performed by the group were collected and arranged by Lewin.