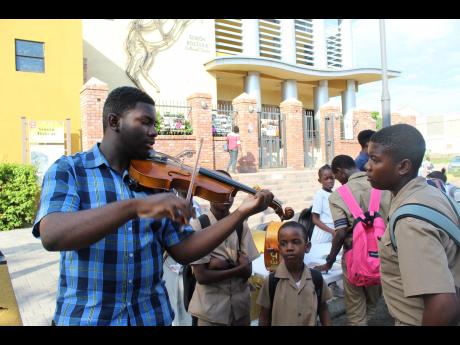 Contributed
Youths observe as Jovielle Hayden, a member of National Youth Orchestra of Jamaica, plays the viola during registrations for the new centre last week. 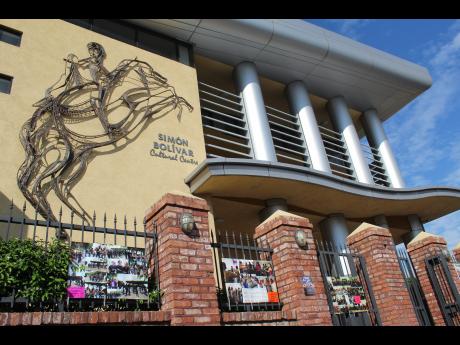 Contributed
The Simon Bolivar Cultural Centre, which will be the eighth location for the NYOJ. 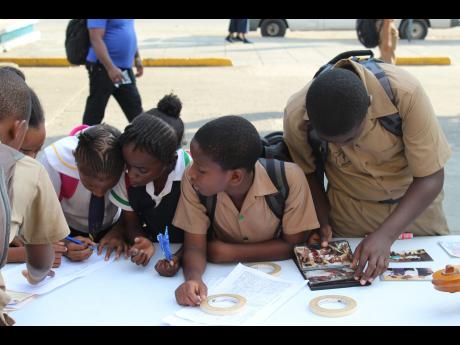 Contributed
Children line up to register for the new youth orchestra centre in downtown Kingston.
1
2
3

Over the last two weeks, the National Youth Orchestra of Jamaica (NYOJ) has been busy making arrangements for the new community orchestra location to be opened tomorrow, at the Simon Bolivar Cultural Centre, located at the intersection of North Parade and Church Street, downtown Kingston.

The programme facility will be the eighth centre established by the NYOJ accommodating at-risk youth and music amateurs islandwide. The International Monetary Fund (IMF) is providing direct sponsorship for the new centre in addition to the Culture, Health, Arts, Sports and Education (CHASE) Fund, which has been consistently providing financial support to the NYOJ.

Team members from the NYOJ spent Monday to Wednesday of last week signing up interested persons for the youth orchestra programme in Kingston and the response received was unexpected.

"We have approximately 120 names registered for the classes to begin (tomorrow) which is far more than we anticipated for the programme itself," Karen Prentice, executive director of NYOJ said.

"Coming from just two centres for about three years and now embarking on number eight, is quite an accomplishment for us and also shows that there is an interest in classical music in youths," Prentice added.

The programme is open to the public and has no admission fees.

Since the start of November, the NYOJ has received 23 instruments from the Japanese Embassy as well as six violins from the Friends of the NYOJ in Canada.

"It is possible that not all persons who signed up will make it to the classes, but the response also shows that children are seeking positive activities to do after school instead of just hanging out at the parks. Fights occurred even during the registration period and it was something of great value to bring to the persons involved," Prentice said.

The youth orchestra is exploring the possibilities of opening world-class centres for music islandwide, while creating a space for aspiring live musicians to play. Students will be taught the basics in music, select an instrument that they have developed an interest, in and learn the technicalities and how to care for the tools.

"There is even a programme running at the South Camp Correctional Facility sponsored by the Organisation of American States, and because the NYOJ has been fortunate to receive donations from local and international companies, classes are offered free of cost," she continued.

After long service and attendance, youths are allowed to take instruments home to practise. This period can be anywhere between six months to a year, once the level of responsibility is recognised by the administrators.

In addition to opening the centre, the NYOJ had hopes of hosting its December 3 concert in the park downtown, but were unable to secure the required permission to host the event there. As such, the concert will be held at the St Joseph's Teachers' College auditorium between the hours of 4 p.m. - 6 p.m.