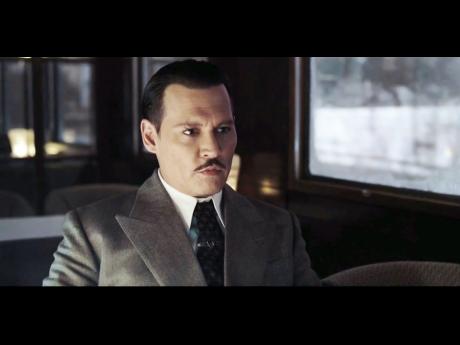 For the second time in nearly 50 years, the Agatha Christie novel Murder On The Orient Express has been adapted to film. The story follows the incomparable detective Hercule Poirot and his impossibly huge moustache.

Hercule finds himself aboard The Orient Express, a magnificent train packed to the brim with passengers from all over the world, travelling peacefully until, in the dead of night, one of them meets an untimely end. Unfortunately for the killer, Hercule Poirot is probably the world's greatest detective. (Sorry Batman.)

What follows is a simple whodunit, as the detective makes his rounds interrogating the various passengers. The film is directed by Kenneth Branagh, who also plays the lead detective. He's not the only notable cast member, as the movie is filled with eye-popping number of actors. Penelope Cruz, Johnny Depp, Judi Dench, Willem Dafoe, Michelle Pfeiffer. Murder On The Orient Express has a rather impressive ensemble, though it leaves something to be desired.

No one does a bad job per se, but no one was particularly impressive either. In fact, each of these actors has had better performances this year alone in different projects. The most engaging of the lot is Branagh himself as the eccentric but brilliant detective, whose obsessive-compulsive disorder makes ordinary life unbearable, but solving crimes simple. The actors give you enough of their characters to play your own personal game of clue as the story unfolds, but they tend not to stick with you after the credits roll.

The best part of the film comes through its impressive direction. Branagh uses a handful of interesting and engaging shots that utilise the claustrophobic train setting to his advantage. You feel like an uninvited voyeur creeping through the corridors, catc›hing a glimpse of various interrogations through a curtain or a window. If only this style wasn't broken by a series of mostly unnecessary and incredibly dull exterior shots of the train running on its track.

At the end of the day, Murder On The Orient Express is a fine film. It's incredibly well designed and meticulously detailed in its production. There's a sense that the intention was to make a film that you'd only see nowadays during the classic movie hour on cable television. I'd say that goal was met, and is best seen on a quiet afternoon, while one enjoys a good old-fashioned murder mystery.