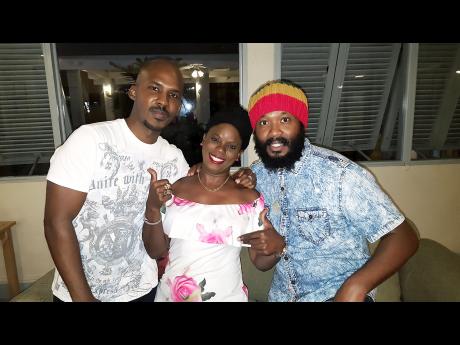 On the heels of Trueversation - the successful single with Queen Ifrica and Damian Marley, local producer Rickman Warren (who also previously produced and remixed Jah Cure's, Never Say Never) and his Jamplified Records outfit have notched a cross-regional success with the release of Reggae: My Endless Love, the debut reggae set from singer Juliana Sealy, popularly known as Lady Virtue.

The Barbados native presented the disc in a live showcase at Bridgetown's Erskine Sandiford Centre, which included performances from collaborators Amber Orano, Twin Man, Shirley Stewart, and Jamaica's own Warrior King. The set, which coincided with the singer's birthday, was warmly received, especially the contribution from Warrior King, who had the crowd on its feet. The Tourism Ministry of Barbados invited and hosted the producers and Jamaican band, Yard Friendz, for the event.

"It's a great feeling to have a hand in spreading Reggae throughout the region and cement the creative links with our Caribbean neighbours and a great talent like Lady Virtue, who is helping to keep a positive vibe in the music," said Warren.

The 15-track disc includes, Tek de Pressure Off, featuring Luciano, which is in rotation on Jamaican airwaves, as well as collabs with Lutan Fyah, Chase and soca artiste Madd Dog (whose hits include, Come Fah Dagga. Other standout tracks are Respect de Herbs, featuring Buggy Nhakente, and Jekyll and Hyde, which is currently in rotation. Virtue had previously released two calypso/soca albums (Julie on the Rise and Releasing the Power).

Assessing her career in light of this latest venture, Virtue says she is happy with the progression and is eager to make even more of a mark on the music scene globally.

"With everything, one should grow from strength to strength and that's my intention. So within the coming years, I expect to keep bringing music that people can relate to. If a song can relate to your situation and help in some way, then I feel I have achieved my goal," she said.