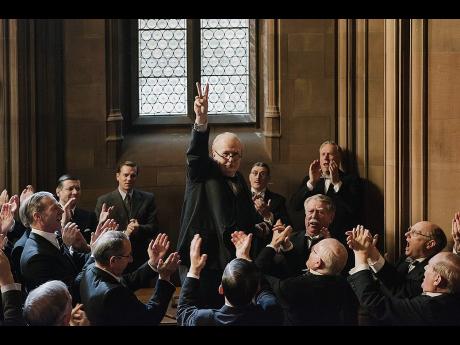 Every year, the must-see movie season comes in many waves. There's the over-the-top entertainment of the summer, the quiet surprises every other spring. The one you can always rely on, though, is the fall. It's the time when the best and brightest vie for the attention of the Academy Awards. Darkest Hour is one such film, telling the story of Winston Churchill's tenure as prime minister, all while showing Gary Oldman's grasp at the golden statue.

For what could very well have been an actor's showcase, Darkest Hour is remarkably substantive. The story covers the initial stages of Churchill's tenure, showing the events that set the stage for his wartime leadership. It stands as more than a simple history lesson, as the film portrays the enigmatic figure with an unexpected vulnerability. Oldman gives Churchill a sense of relatability, showing the indecision of the larger-than-life figure.

When the story calls for it, Oldman does deliver a fearsome performance, as he delivers speech after speech. Then again, he's got quite the script to rely on. If the Winston Churchill movie had faltered on the script, I believe he'd be rolling in his grave. Aside from the dialogue, the movie has an incredible amount of thought behind it. Certain shots stand out as visually captivating, certainly not what you expect from a rote biopic.

As the title suggests, Darkest Hour is a film of urgency, one that is constantly burdened by foreboding threat. To that end, the movie is exceedingly well paced and has a comfortable panic as it tells the Churchill story. Even to the most minor detail, the film keeps a sense of immediacy. Throughout the movie, one can faintly hear the ticking of a clock in particular scenes. As the movie updates the audience on the date, the title moves and sounds like an analogue clock. Everything points to time being of the essence in Darkest Hour.

In a time when resistance to tyranny seems less and less in fashion, Darkest Hour is a timely reminder of its importance. The film inspires and gives more than would be expected from yet another biographical picture. Aside from a few moments when it feels slightly overdramatised, it's a definite success. I'd recommend it highly.