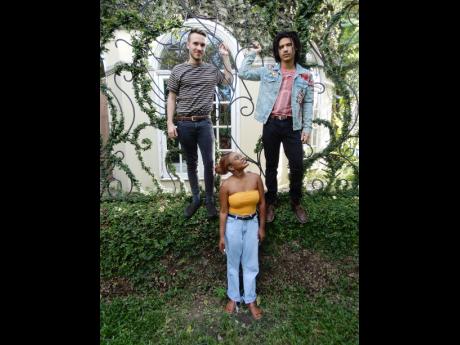 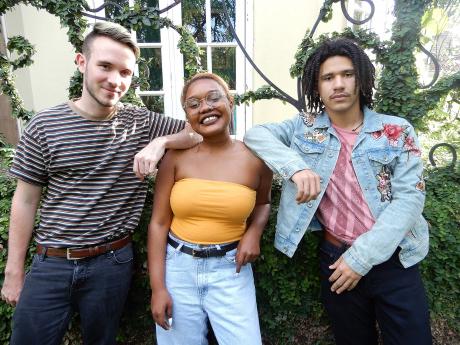 Amindi K. Fro$t, Tessellated and Valleyz' mindlessly catchy lyrics and addictive music may have had people dancing to their almost one-year-old single, Pine and Ginger, rather than analysing its lyrics.

Last December, Valleyz, a young producer from Florida, sent the rhythm to Amindi, who resides in Los Angeles. In less than six months, Pine and Ginger, partly inspired by Christmas beverages, caught the attention of Warner Bros UK and then was signed to Atlantic Records this September.

"My mom always made fruit juices, in particular, sorrel, as well as pine and ginger. So in a moment by myself, I decided to listen to the instrumental while enjoying a little left over from the Christmas holidays," Amindi told The Gleaner.

It was the first time the fresh-faced singer (who was in high school at the time) experimented with dancehall fused with pop music. When Tessellated, a Jamaican, deejay, and roommate to Valleyz, heard her interpretation, he quickly jumped on with his verses.

"It just flowed out perfectly. The melody along with the words were relative and natural. It was so organic and not forced, because it was something I could relate to, all starting with a glass of pineapple and ginger juice," Amindi continued.

But Pine and Ginger is a lot of things - a cross-genre track; a tastemaker for spicy pineapple juice or rum and sorrel; and, most importantly, a juxtaposition of the acts of drinking and smoking as coping mechanisms. However, the creative minds behind the lyrics, Amindi and Tessellated, did not plan to do that.

The song matured into three minutes and 10 seconds worth of conscious lyrics to explore from the first sombre intro (Guess that you just know when, another soul is broken/It's always kinda funny how, you find out how they're coping) to the chorus (Me ah drink pine and ginger/Him wah me fi wine pon di ting and me nuh play that/Him have the rum inna the sorrel, guess him ah drink away him sorrow) that contrasts with the things people indulge in.

Tessellated said "drinking and smoking are ways that some people do cope with their problems, just as others do in alternative ways. The song is really about the fact that everybody is dealing with the same issues, just in different ways, and we are simply commenting on the reality of how individuals cope".

Amindi said, "I didn't go with the intention of putting down or glorifying unhealthy coping mechanisms, but just to speak about them - it is what it is. They do exist; they do help some people, while it is not the same for others. People on Twitter are always tweeting that the song sounds so happy and at the same time it's not."

"And my take on the lyrics is just as good as the average listener. But I do think the music, combined with our efforts, influenced that juxtaposition. The production was upbeat and melodies are jovial, and I think the kind of morose lyrics does create the whole vibe," Valleyz said.

The verses are riddled with clues, down to the outro that even gives props to individuals who use music and writing (songs or poems) as stress relief.

Thus far, the artistes have not received any backlash from the public for the lyrics (Amindi's parents were curious about what their 17-year-old was using as a coping mechanism and what 'ting' she was speaking of).

The neo-dancehall trio is only left with the duty to answer tweets and YouTube comments, although only about 10 out of 400 comments under the video uploaded to YouTube have asked for the real meaning of the lyrics.

Another challenge was for them to develop effortless chemistry to complete the musical project and for Valleyz to make the composition sound like it was done in one studio, since Tessellated recorded in a bedroom-closet-turned-voice room and it was similar for Amindi. The magnetism between them is probably due to their love of instruments and seeing music as an art.

"We want to build relationships with producers and other artistes on the island, and let's not forget our fans. There are a few surprises as well," they said.

They will perform together and as solo acts at Tessellated and Friends, Barbican Beach, on December 15. The line-up also includes Runkus, Sevana, Zac Jones, Krs and Bnjmyn.