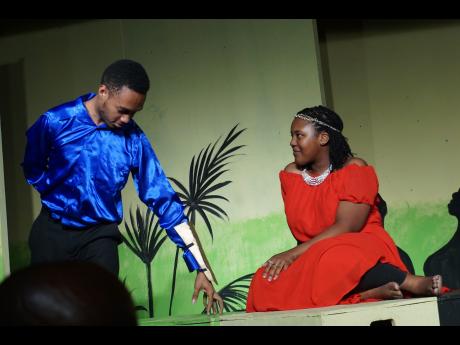 Ardenne High School students perform during one of the Act IV plays. 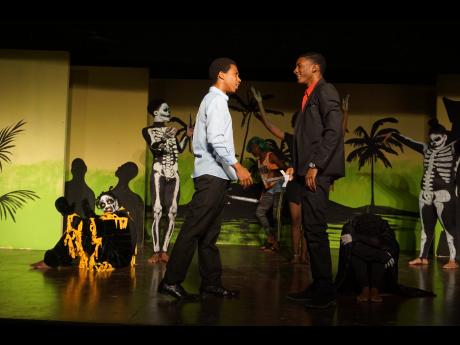 Ardenne High School students perform during one of the Act IV plays.
1
2

It was baptism in the world of theatre for five Ardenne High School grade 13 students, who had to plan and implement a project for Unit 1 of Performing Arts, a course at the CAPE level in the Caribbean Council Examination (CXC). The experience gained was valuable and has left them with a strong appreciation for theatre, as well as life.

The five students, Dania Brown, Jhada-Ann Walker, Deidrie Wadsworth, Alex Anderson and Akeem Anderson, along with their teacher, Suzanne Beadle, spoke with The Gleaner last Saturday, the first presentation of the project. It came in the form of four one-act plays. They titled it Act IV; the venue was the Phoenix Theatre on Hainning Road, St. Andrew.

A satisfied Beadle said that the students began their preparation over the summer break. "They showed their proposal that changed several times before they came up with one that would work and was feasible. And one that had the structure that the syllabus required. They pretty much did everything themselves."

Dania said: "It was very hard and we faced a lot of challenges. It was a blessing though, from it we have gained a lot of life skills and a better and greater understanding of theatre and the running of theatre."

An excited Jhada-Ann concurred. She was particularly pleased with the turnout for the first night. "I have learned so much in terms of teamwork and how to bring a show together."

Deidrie understood the importance of teamwork. "When it felt like it was falling apart, that's when teamwork matters. We found different solutions for different problems."

For Alex, a former winner in the JCDC Children's Gospel Song Competition, putting the production together was changing.

"It came with a lot of struggle. If this process never happens, going into the theatre world after this, I would think it is fairly easy, but this process has taught me what to expect and what to do." He concluded, "The hard work is necessary."

Akeem said, "The most beautiful thing from this experience is the reaction from the audience. It's not just them spending money but you bringing them into this world that you created, and after that sending them home happy."