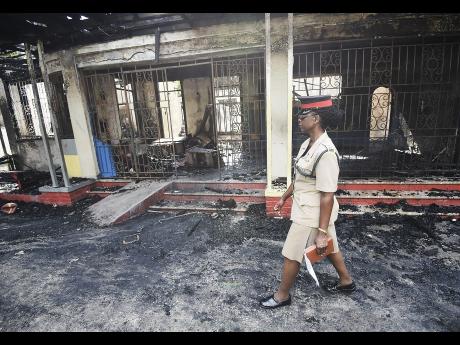 File
A policewoman walks by the burnt-out remains of Walker's Place of Safety on Lyndhurst Crescent in St Andrew last week. Two female wards of the State perished in the blaze. 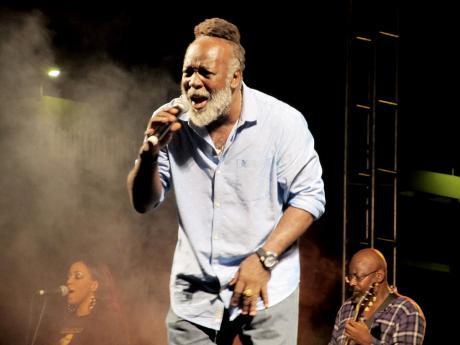 In addition to donating to Patricia House, this year's Red Rose for Gregory Concert on Valentine's Day will be used to collect donations for Walker's Place of Safety. Gregory Isaacs's widow, June, said that in light of last week's fire at the facility which affected more than 30 wards of the State, the Gregory Isaacs Foundation decided to offer assistance.

"We have been having this show for part proceeds to go to Patricia House drug-rehabilitation programme, because Gregory had his issues and we wanted to help others who had similar problems, because most times they are neglected and forgotten. But this year, we will be collecting stuff for Walker's Place of Safety," she said. "They are regular recipients of help from the foundation, but because of the tragedy, we felt we needed to do something more. We will be collecting non-perishable food items, clothing, food supplies and just anything that you can give that you think the kids will need. We will have containers on location at the event for anyone who wants to donate. We will also be accepting cash donations." Persons can call 523-9918 to make donation arrangements.

R&B singer Kelly Price has been announced as the overseas headline act, while Freddie McGregor will lead the pack of Jamaican entertainers. Isaacs says the show, scheduled for February 14 at the Karl Hendrickson Auditorium, Jamaica College, is guaranteed to be extra special as it is not only Valentine's Day, but also a public holiday, Ash Wednesday." In addition to Kelly Price and Freddie McGregor, the show's line-up will include Rising Star winner for 2017, Short Boss, PaKaGe (Patricia Edwards, Karen Smith and Gem Myers), Robert Minott and Kaydeno.

"Expect great performances, because Freddie has his own repertoire of love songs and he will also be doing a cover of some of Gregory's, and Kelly Price will bring her R&B soulfulness as well," Isaacs said.