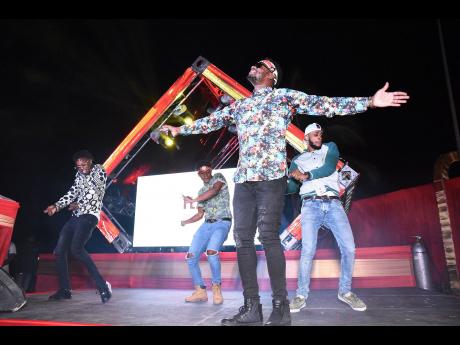 Contributed
The face and voice of the new Grace 'Flava With A Beat' Campaign, Ding Dong.

On Sunday, the Kingston waterfront came alive as Grace Foods launched its latest brand campaign, 'Flava with a Beat' to customers and media at a private event with a special guest performance by dancehall entertainer Ding Dong, front-and-centre as the voice behind the campaign.

'Flava with a Beat' will see a refreshed look and feel throughout all of Grace Foods' communication channels and activities including all advertising and marketing efforts. This is where Ding Dong will play a major role - by bringing his own 'flava' and beat by being the voice behind the new campaign jingle and his latest dance move "flairy" being the official dance for the campaign.

"I'm really excited for the opportunity to work with Grace. It's a brand I grew up with and still love to this day, especially my mackerel and corned beef. I'm proud to see that the Grace brand has flown the Jamaican flag high across the globe, and I'm passionate about doing just the same with my music everywhere I go. Grace and Ding Dong to the world!" said dancehall entertainer Kemar 'Ding Dong' Ottey about his partnership with Grace Foods.

"Ding Dong represents fun, vibes, youthfulness, and movement. This captures the spirit of the campaign, and we are happy to work with Ding Dong to tap into that exciting element of the Jamaican personality at this time," said Angeline Gillings, managing director, Grace Foods Limited.

The 'Flava with a Beat' campaign, will run throughout the year in the Caribbean, Central America, North America, and in the UK.