Spiritual connects with Ja at home, in US 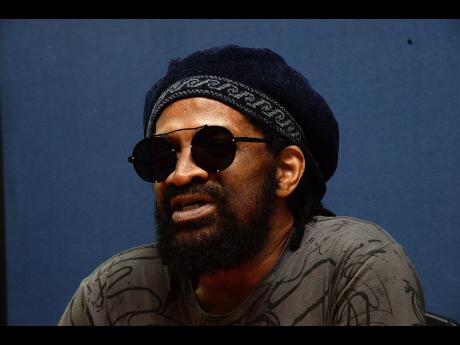 Singer Spiritual reserved his most flamboyant foot movement for the encore song, Give Thanks of Praise, of his approximately one-hour performance at Pulse's Trafalgar Road, New Kingston, headquarters on Saturday night. After Tommy Cowan's enthusiastic introduction emphasising Spiritual's authentic reggae sound, he had performed songs from his Awakening album in full and without restarting an individual song in a 'pull up'.

As a vocalist he was alone for the most part, save for guests Iba Mahr (Liberation) and Droop Lion (Show me the Way).

After the concert, seated on a chair placed on the stage from which he had just sang, Spiritual told The Gleaner that for his "first time as an adult" on a stage in Jamaica, he was satisfied.

"I feel like they came for the healing. They received it," he said. At points in the concert, Spiritual referred to himself as a humanitarian and, in the interview, Spiritual made it clear that it was not just for the stage, as he has had that attitude from the beginning. "God is the supreme being, then we are the human beings. That is where it comes from," Spiritual said.

During his childhood in Jamaica, Spiritual said, "I was a free kid. I was with people who looked out for me." Part of that experience was encountering the late Joseph 'Culture' Hill. And he remarked on the presence Burning Spear has in the US, when he performs at places like Carnegie Hall and packed outdoor venues. His voice is reminiscent of Culture and Spear, guest speaker Olivia Grange, minister of culture, gender, entertainment and sport, said, remarking on Spiritual's vocal similarity with the latter before the concert.

Spiritual told The Gleaner that there is "no irritation" when his voice is compared to Culture's and Burning Spear's.

"I just want them (the audience) to receive the message," he said, noting similarities in natural tones among the three of them.

"I did not copy from Spear," Spiritual said. During his performance, he did Culture's See Them a Come and Burning Spear's Marcus Garvey. For the latter, the two-person horn section was expanded to four.