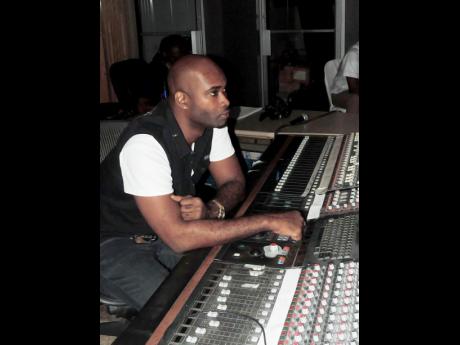 Mel Cooke
Mario C at the controls during Monday's listening session for the EPX of 'Even a Gangster Falls in Love' by Kevy The Artist. 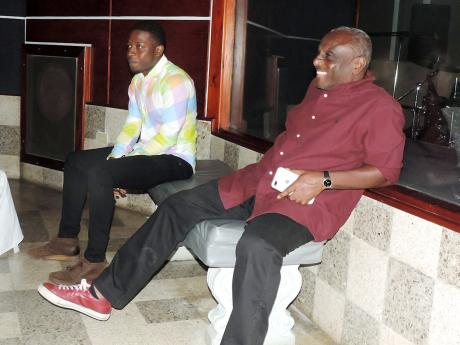 File
Producer Gussie Clarke (right) and Kevy the Artist at Tuesday’s listening session for the ‘Even a Gangster Falls in Love’ EPX at Anchor studios, Windsor Avenue, St Andrew.
1
2

The last of three letters identifying the subject of Monday evening's listening session at Gussie Clarke's Anchor Studios turned out to have a double meaning.

As a mathematical symbol, the 'X' added to 'EP' meant multiples, as those gathered in the main studio at the Windsor Avenue, St Andrew, music complex were introduced to several treatments of Even a Gangster Falls in Love by Kevy the Artist. This was audio and, in addition to the many music varieties of the single, four individual videos for specific versions of the song were shown. In Roman numerals the 'X' specified the number of presentations of the song - 10.

Explaining his approach to the EPX of Even a Gangster Falls in Love, producer Gussie Clarke questioned the approach of music creators who do not come up with a good song, yet keep going with others.

"If you can't do one good song, why continue with 10 more?" he demanded. I flip it. I find a good song and do 10 versions of it," he said. Among those are Reggae (the original). Live Acoustic (for which there is a music video), Live Acoustic (featuring Pam Hall), Afrobeat (by David Dayorault from the Ivory Coast), Dancehall (by Lenky Marsden, featuring Sky Juice), Reggaeton (by Danny Browne, featuring Shaggy and Sky Juice) and Pop (by Steve Francis, USA).

Browne also contributes a Gothic version. the Soundtrack remix is done by Richard Rodwell (Canada), the Jazzy Remix Instrumental features Alex Marten-Blanken and selector Boom Boom puts them all together in a Mixtape. Among the videos that were shown, the Afrobeat visuals were done on a beach and the Live Acoustic featured Hall and Kevy close to a piano.

The project has been in the works since January 2016 and, as Mario C operated the controls to present the individual elements of an obviously substantial project, Clarke said that it had cost "millions". However, he made it clear that with all the versions of Even a Gangster Falls in Love, it is "one project", though catering to different musical tastes. Initially, the plan was not to get to the stage of an EPX, Clarke said, but as the team worked on the song, "it kept growing."

On Friday evening, the presentation of the project will move outdoors at Anchor, as a stage will be set up for Kevy and other artistes to perform, Clarke says there will also be a tour of the Anchor music facility.