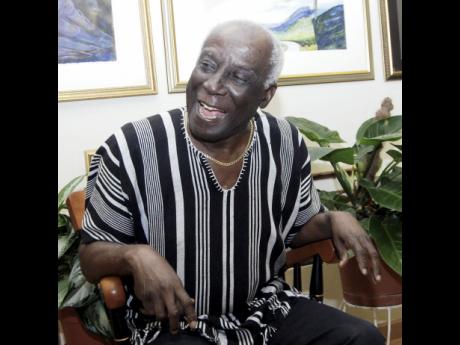 Professor Ralston 'Rex' Nettleford would have turned 85 years old on February 3 this year. He passed away in the United States in 2010, a day before his birthday, and so while the annual tribute staged by the Rex Nettleford Foundation marks his date of birth, inevitably, it also observes his date of death. This year's Remembering Rex will be held on Tuesday evening at the Little Theatre, featuring the NDTC and The University Singers.

Nettleford prepared the National Dance Theatre Company (NDTC), which he co-founded and was long-standing artistic director of, for when it would carry on without him. Elizabeth Buchanan-Hind, executive director of the foundation, told The Gleaner that Nettleford would speak about "presiding over his own setting sun".

One of those who reflects those rays, immediate past artistic director of the NDTC, will be honoured on Tuesday. "In 2003, Mr Moncrieffe was made deputy artistic director," Buchanan-Hind said. "I think he (Nettleford) was preparing the NDTC for life without him." When Nettleford died suddenly, the organisation continued running.

Additionally, bursaries to a person affiliated with Cornwall College, which Nettleford attended, and another with the hall named after him at the UWI's Mona campus, will be officially handed over. Buchanan-Hind explained that both entities select a student who exhibits Professor Nettleford's promise. This year's Cornwall College selection is now a first-year student at the UWI's Western Jamaica campus, while the Rex Nettleford Hall recipient has just graduated from the UWI.

While Remembering Rex is held as close as possible to Nettleford's birthday, staging it on the actual date can be difficult as the National Pantomime has its run in the Little Theatre during the period. That does not hamper the turnout, as Buchanan-Hind said, "usually, we have a full house." And while the NDTC and University Singers are strong entities on their own, she said "there is something special about this event, in tribute to Rex."